Tottenham have four games in which to make history for the club. And if anyone has the form to overtake Chelsea at this point it has to be Spurs.

They are in a fantastic position and have to believe that they can win their remaining games and really put more pressure on to high flying Chelsea.

Perhaps it’s going to be a bridge too far with the gap still at 4 points with just a few games left to play. But Tottenham look like they are really enjoying their football at the moment having convincingly beaten Arsenal at the weekend.

Even if they don’t catch the Blues they can still look back on a really successful season in which they have guaranteed themselves Champions League football for a second term running.

The only real discord in the squad right now is surrounding right back Kyle Walker who was left out of the game against Arsenal in favour of Kieran Trippier and his future is the subject of much debate and speculation right now.

Danny Rose could return soon after a knee ligament injury but Erik Lamela remains sidelined and youngster Harry Winks has no specific return date after suffering an ankle injury.

So here is TFF’s best XI to take the points in a tough away trip to West Ham. And we are throwing Kyle Walker back in there from the start as his future can be resolved at the end of the season. Now is not the time for pride to get in the way and he is easily the best right back in the league right now. He certainly makes Tottenham stronger and much better going forward. 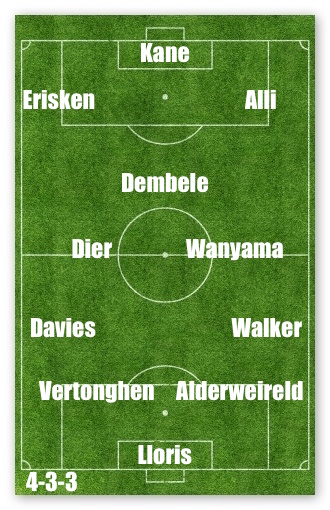