TFF wondered how well Chelsea would cope against Manchester United with their 3 at the back system still young.

And the answer was emphatic. Although the first goal was scored so early that it skewed the game, Chelsea were ultra-professional in all areas of the park.

They were first to every challenge, looked quick and purposeful in possession and, although David Luiz really ought to have been sent off for a studs up challenge on the ghastly Marouane Fellaini, he finally looks as if he has found his perfect position.

With two defenders behind him Luiz can play more as a midfield anchor man where he can thrust through the gears and start attacks as well as adding further bite to the engine room. And this system also allows Eden Hazard to showcase all his talents more of the time. He cuts inside more and offers greater goal threat as a consequence.

It all seems to have clicked into place for Chelsea after a really poor start to their campaign and, from nowhere, they now look like serious title contenders.

A week is of course a long time in football but Antonio Conte will not be scrapping the current template any time soon and this trophy hungry manager will surely put a strong side out against West Ham. Because Chelsea look anything but tired right now. The only change could see John Terry get to stretch his legs again after injury.

Here’s our XI for West Ham: And it’s strong 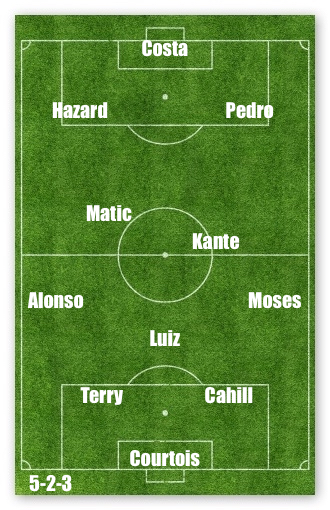