Even when international football is blighting the calendar there is seldom a dull moment at Manchester United. Jose should have been resting up but there has been loads of media fallout from his comments about Luke Shaw and Chris Smalling, made after the defeat of Swansea.

Smalling has a broken toe and won’t play against Arsenal in what is seen by many as a must win game for Manchester United. A win will see them cut the gap to fourth to just 3 points. A defeat is inconceivable for Mourinho and United.

But Luke Shaw could get a game and TFF thinks that Jose may use wingbacks again. It worked well against Swansea and could be a useful formation to pack the midfield against in-form Arsenal.

This would also give Michael Carrick the opportunity to build on his last performance where he was positioned almost as a sweeper in the win in Wales.

Zlatan is suspended so perhaps we will see a start for Marcus Rashford at number 9. Manchester United could certainly use some pace up top to stretch an Arsenal defence which isn’t the quickest in the central areas. We would love to see Anthony Martial join him in the starting XI and have been saddened to see him only getting a peripheral role under Jose.

So here is the XI that we believe can undo Arsenal in what could be United’s new formation.

Manchester United fans: how do you feel about three at the back? 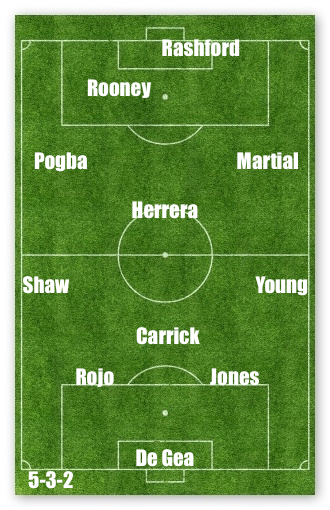