Jose Mourinho revealed in his weekly press conference that there are five injuries in the squad ahead of a must win game at Sunderland on Sunday lunchtime (local time).

Ashley Young came off in the midweek game against Everton feeling his groin and will miss this encounter as he recovers.

Mourinho also confirmed that Wayne Rooney is not available for this one.

With Juan Mata, Chris Smalling and Phil Jones also out the squad is looking a little thinner of late.

But Manchester United’s big hitters are all available and they will have no excuse for anything less than three points against bottom of the table Sunderland.

TFF hasn’t seen anywhere near enough of Marcus Rashford and Anthony Martial in tandem this season. They played a few games together earlier in the campaign. But as the season has gone on Jose has tended to start with one or the other and not both.

But a lack of pace and ability to beat a man is one of United’s biggest problems at present and TFF believes that they could make a big difference if they played at left and right wing together.

We would put Mkhitaryan and Pogba in behind Zlatan in a 4-3-3 and let Herrera marshall the defense from deep.

We also want to see Luke Shaw start. He may still be inconsistent but that can only be ironed out with minutes and he made a real difference when he came on against Everton in midweek, hitting the shot that drew the penalty from which Manchester United equalised.

So here is the eleven which TFF believes can offer more penetration end get behind the opposition lines on a more frequent basis.

Manchester United fans: is this the team to score more goals? 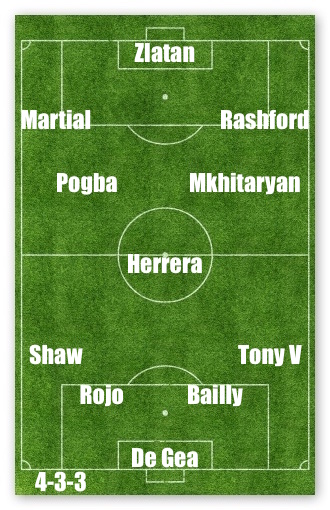