Our second favourite media outlet, The Guardian, doesn’t usually spend too much time on journalistic sensationalism. So when they reported on Wednesday that Manchester United are trying to sign five A-list talents from around the world of football we sat up and took notice.

Jose Mourinho, the head coach of Manchester United, clearly needs to add some strength in depth to a side which is still in transition. Manchester United have become extremely hard to beat but they don’t score enough goals and they also need a midfield replacement for the supreme Michael Carrick who has been at the club for over 10 years.

The defence is looking more solid than at any time over the last three years but they could definitely use a specialist right back because they haven’t had one since the days of Gary Neville. To that end, Manchester United are reportedly interested in signing Brazilian right back Fabinho from Monaco. He’s quick and adventurous and would get bums off seats at Manchester United, whose fans love to see the defenders attack.

And the Monaco links continue with the Guardian reporting that Manchester United have had a bid of 72m GBP rejected for the superb young striker Kylian Mbappe.

He will surely be playing at an elite side next season as some of the top teams in Europe are supposedly interested in a player who seems to defy physics and age. The third Monaco player that United are reportedly interested in is Tiemoué Bakayoko, a brilliant box to box midfielder who never seems to tire.

Belgian dynamo Radja Nainggolan and German international metronome Tony Kroos are apparently also on the list of players that Manchester United are seriously interested in and if they were to sign all five of these footballers they would surely be breaking all records in the transfer market for a summer spend.

But they would be looking supremely strong next season if they were successful in their quest. Manchester united don’t look too far away from a championship winning side again – and if they get into the Champions League it will be much easier to sign these sorts of players.

Let’s have a look at the possible line up if they do the improbable and succeed in signing all five of these superstars in waiting.

Manchester United fans – is this a team that would win the title next season? 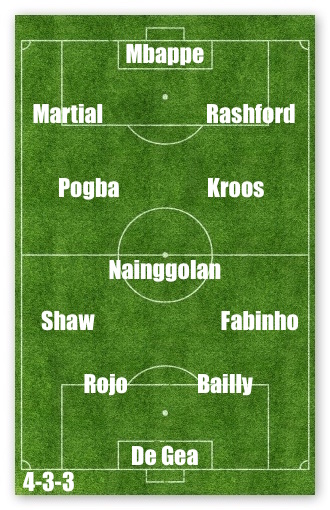