After so many false dawns under the stewardship of Louis van Gaal, those within the corridors of power and fans of Manchester United will be keeping their optimism in check for now.

But out of the ashes of an injury-blitzed squad has risen a new breed of Manchester United youngsters who have, over the last week, confounded the critics who felt that the club had fallen behind the likes of Manchester City and Chelsea in terms of youth development.

Because while those in blue have offered comparatively few first-team minutes to their youths, Manchester United have been throwing them in liberally of late. And with great results.

It’s too early to make predictions about United’s new local hero Marcus Rashford, who has scored an astonishing 4 goals in two games for the seniors.

But what we can say with confidence is that, whether or not Anthony Martial is fit to face Watford on Wednesday, Rashford is in serious contention for a third start in a week.

“Players are coming back in March, I think,”

“We need players who are coming back because our programme is very full.

“Martial can play and also Darmian can play. Maybe Chris Smalling can play. We have to wait and see for tomorrow.”

He also gave potentially encouraging news on the recently returned Marcos Rojo, who took another knock against Arsenal:

“It was a kick [for Rojo]. A lot of players receive kicks and they can play the next match.”

And of the longer-term absentees:

“Fellaini and Valencia are the first ones to come back, I think,”

“Wayne Rooney is still in a brace.”

Based on the type of injuries sustained by the trio we would imagine that Smalling is the most likely to play.

But the prospect of Martial and Memphis playing either side of Rashford with the rejuvenated Mata supplying the craft behind them is mouthwatering. Not only because they are all genuinely quick, but because they all have the individual talent to win games on their own. This gives Manchester United three dangerous points of attack.

So we could be seeing the hatching of United’s next great forward line.

As for TFF, we would throw all three in and play Martial on the right.

Here’s our team for a game which Manchester United must win to retain a slim hope of a top four finish. 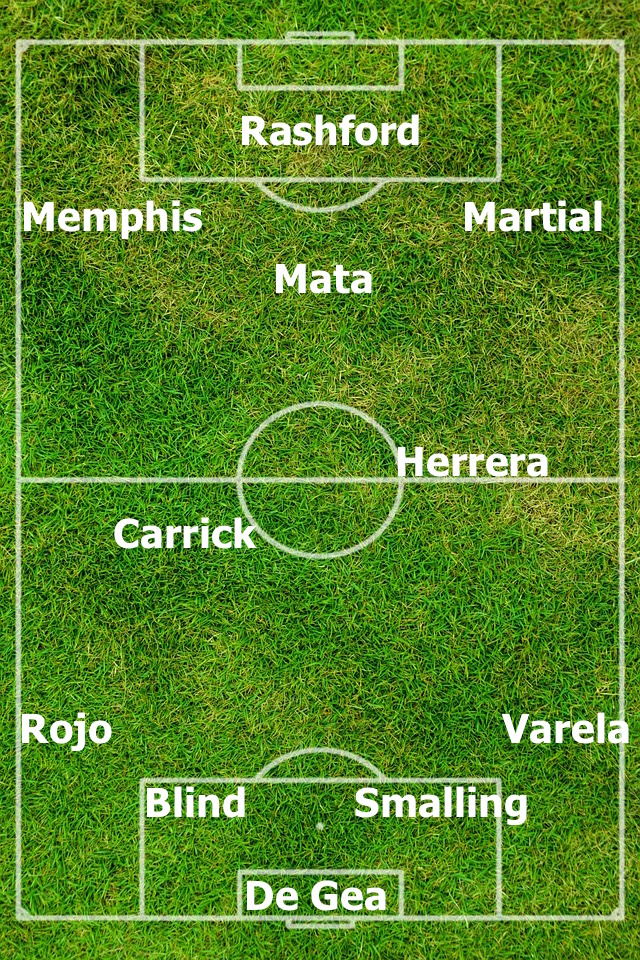