In the light of their demolition of Arsenal in the Champions League round of 16 on Tuesday night, Bayern Munich posted a tongue-in-cheek taunt on their Twitter feed 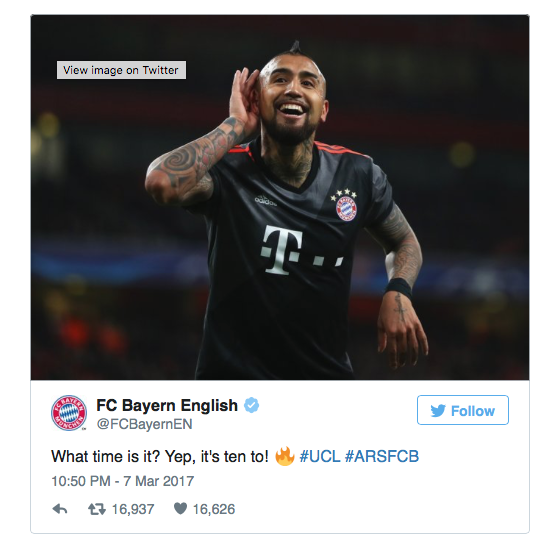 Wenger himself seems impervious to what is actually going at the club and may well opine that the game was tight until the sending off of Laurent Koscielny early in the second half.

But the stats speak for themselves and any excuses that the Arsenal manager wants to make will surely now fall on deaf ears.

Because focusing on trivial matters neglects the bigger picture.

Arsenal should be on the same level as Bayern Munich. They have similar, if not greater resources, due to the incredible amounts of money that they generate from TV deals.

But when TFF looked as the respective front fives last night there was a chasm in class which illustrates that Wenger has not invested as well as he could have.

Robben, Ribery, Lewandowski, Thiago Alcantara and Arturo Vidal are heavyweights in the modern game. But none of them should have been out of the reach of the London club.

By contrast Arsenal could only boast one truly top quality player in a front five which consisted of Ramsey, Walcott, Giroud, Oxlade-Chamberlain and the brilliant Alexis Sanchez.

Everyone except Wenger now agrees that staying on at the club beyond this season will only damage the Frenchman’s legacy further – perhaps irrevocably. Not even his biggest detractors would want that, because Wenger has been like a breath of fresh air for Arsenal and English football.

While he now resembles a hopeless gambler feeding his last pennies into a machine in the hope of the jackpot, he and Arsenal must realise that it’s time for a change.

TFF would move heaven and earth to bring Diego Simeone to the club to add some steel to the undoubted talent in the squad.

Arsenal fans: who would you want as the next manager?