Arsenal’s campaign was virtually identical to the last one and they flattered to deceive when it came to the crunch.

They did of course win the FA Cup which was a surprise to many and they finally showed some mettle in a crunch game.

A really spirited performance against Chelsea was exactly what manager Arsène Wenger needed to allay some of the doubts about his future at the club. We would now expect him to stay on beyond this summer and have one perhaps final crack at winning the title and making some serious headway in Europe.

He’s always been a thrifty manager but perhaps now, more than ever, he needs to take Arsenal to the next level in terms of spending. Of course when you look at the Manchester United squad you realise that money doesn’t necessarily convert to success.

But if Arsenal bought another really top-class duo for the outfield they would surely be much closer to the title next season. Not only that but they may be able to hold onto some of their biggest hitters like Alexis Sanchez and Mesut Ozil.

So who is the best XI this season? Well the goalkeeping position was obviously marshalled superbly by Petr Cech – what a signing he was.

Nacho Monreal is ageing fast but still put in a decent shift on the left of the defence and Héctor Bellerín was a brilliant right back for Arsenal.

Lauren Koscielny was consistent again and Mustafi had a decent first season at the club.

In midfield we love the look of Granit Xhaka and Francis Coquelin although they didn’t play too much together. And the three behind the striker would have to be Alexis Sanchez, Ozil and Oxlade-Chamberlain.

Up top Olivier Giroud deserves to get into the side because he’s such an effective player even if Wenger doesn’t really fancy him that much in the biggest games.

So it’s a strong XI but one which needs improvement next campaign.

Arsenal fans – do you agree with this strongest XI? 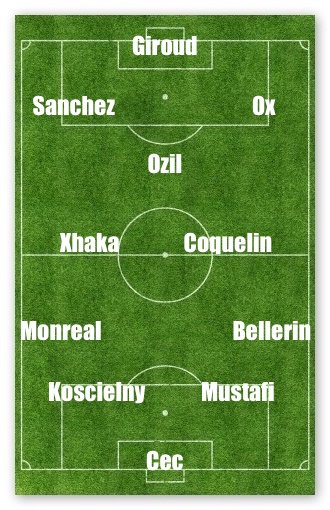