Hull fans might want to watch this game from behind the sofa. Because despite Chelsea losing over the last couple of weeks they were back to winning ways at the weekend and seem able to dispatch the comparative minnows with such ease this season.

Chelsea went seven points clear in the Premier League with Manchester City, Liverpool and Manchester United dropping points at the weekend to increase the comfort of that situation.

And Antonio Conte continues to have the enviable problem of who to leave out of his free-flowing XI.

With half of the transfer window now gone we would still be surprised if Chelsea don’t invest in one or two more players in the window window. Because especially in those wingback areas – with Moses and Alonso playing most minutes this season in lung busting positions – some dynamic cover would be an excellent addition for the second half of the season and Chelsea’s title challenge.

As things are Chelsea should stick with a similar XI and will expect to beat Hull comfortably and so they might give the rest to a couple of their stars. We may well see a start for Michy Batshuayi and Willian in a game where John Terry might get to run out after a protracted injury problem. He could certainly use the minutes.

So here is our XI to beat Hull and this one looks like a home banker if ever there was one. 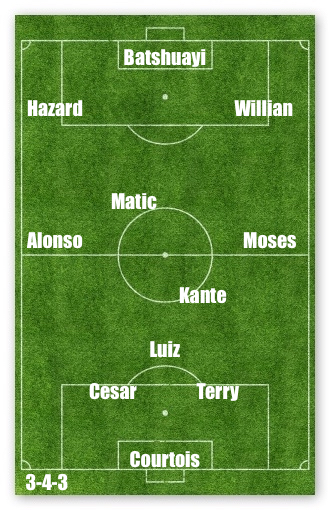