A total freak of nature and a great athlete and leader to boot.

Even though this XI will draw fierce debate and fury few can disagree with our choice of keeper.

TFF actually prefers Patrice Evra as a player – mainly for his increased sense of adventure to the Englishman – but for his sheer consistency and dependability few players can match Cole.

He was quick, strong, athletic and put in a lovely cross.

May not have been the most technically gifted player in the team but he was a true leader and was the ideal partner for the more elegant Rio Ferdinand.

One of TFF’s favorite all time players. Ferdinand was like a defender, midfielder and attacker rolled in to one. The fact that he so rarely got the plaudits at Old Trafford says everything you need to know about the strength of the Manchester United squad during his time at the club.

We searched around for other suitable right backs and there have been some corkers. But, even though Irwin mainly played on the left at Manchester United, he was right footed and has to make the best all time Premier League XI. He was a fast and fierce competitor who rarely let his man past him and hit a wicked corner and free kick. Mr reliable.

Another player who will draw little to no debate about his inclusion. If there is a better right winger in Premier League history I would love to see him. Ronaldo basically ensured that all bets were off for the title during his best years at the club.

A genuine wizard who was apparently appreciated more by other players than managers. He could do anything with the ball and was a prolific goalscorer before he was moved back into midfield to ping the ball about with laser-guided precision.

To have to pick between him, Patrick Vieira and Roy Keane is just unfair. But Gerrard gets in ahead of his illustrious contemporaries simply because he scored more goals.

Giggs was another free of nature who played until he was forty but looked way too good to retire even then. TFF would have loved him to carry on as a player for a couple more years to offer the odd cameo when Manchester United needed some guile in the final throes of games. Why oh why did Louis van Gaal persuade him to retire?

When Henry was at his best he was every bit as good as Giggs. He would float in from deep from that left hand side with the ball seemingly stuck to his foot. But even though Henry was supremely skillful he rarely showboated and was instead a player of ruthless efficiency and economy. He scored 226 in 369 games for Arsenal and was possibly their greatest player of all time in his nine magnificent seasons at the club over two spells.

We had to leave out the likes of Wayne Rooney and Eric Cantona to squeeze Shearer in. Rooney has a better all round game and Cantona brought the sort of magic to games that is worth the entrance fee alone.

But in terms of sheer, brutal power and efficiency in front of goal, Shearer surely wins hands down. And his statistics tell that story emphatically.

Shearer scored 206 goals in just 405 games for Newcastle – a team which wasn’t even in the elite for his whole ten seasons there.

One can only wonder how many he would have scored if he had joined Manchester United instead of Newcastle.

Shearer wasn’t the quickest or the most skillful player in the world but you would have to go a long way to find a better finisher in world football when he was in his pomp. 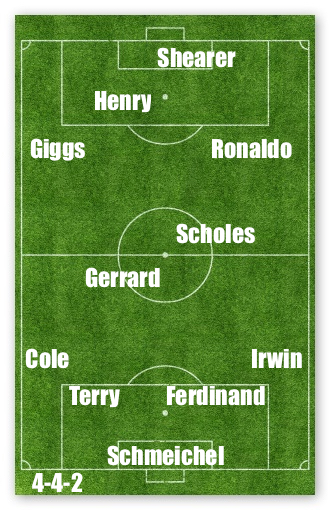