Chelsea have agreed a deal to let their Brazilian playmaker Oscar leave for China in what is something of a landmark move in modern football.

The Chelsea website tweeted this message earlier today to confirm that terms had been agreed between the two clubs. 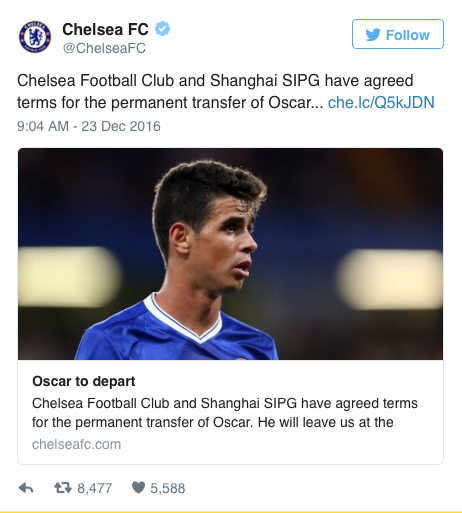 We have seen some interesting signings from the newly minted Chinese super league over the last few years. But this one is different. Because Shanghai SIPG are signing a player in his absolute pomp.

We aren’t talking about a player who is near retirement and looking for a last big contract but a 25-year-old who is going to Asia to earn somewhere around £500,000 per week according to some reports.

Just to be clear, that’s a bigger salary than any footballer in Europe is currently earning.

It’s going to take something extraordinary for there to be a mass exodus from the top leagues in Europe over the next few years. But we saw classic examples with Paris St. Germain and Manchester City over the last few years when they out spent their more illustrious rivals and fast tracked themselves into the upper echelons of European football.

Europe is an attractive venue for players from all countries in the world and will continue to be so. But perhaps we are getting closer to a world super league to one day eclipse the European Champions League.

The logistical problems involved in such a tournament could preclude it happening anytime soon. But Chelsea obviously felt that they simply had to cash in on this deal and will surely spend a huge amount of cash themselves in the January transfer window.