TFF struggles to remember a time since The Champions League victory in 2012 when things were looking this rosy for Chelsea.

Sure they won the title under Jose 18 months ago but that team didn’t look anywhere near as strong as this one. And while Antonio Conte will surely sign more players in the coming windows, it is already difficult to see where this team can noticeably improve – it feels as if Chelsea are still low down on their current upward trajectory. The top of the arc is in sight, but still some way off.

Branislav Ivanovic has been a wonderful player for Chelsea. He has registered 92 caps for Serbia and 368 games for Chelsea in 10 seasons at the club. But he has been embarrassingly off the pace at times of late and it’s surely time to send him to a slightly less taxing league. But latest reports suggest that Barcelona, no less, could be interested. Talksport writes:

LISTEN TO A PREVIEW OF CHELSEA’S GAME AT THE WEEKEND

It may, at first, sound ridiculous considering that Barcelona usually go for speedy and highly mobile full backs. But if the plan was to utilise Ivanovic as a back up central defender then perhaps the rumour has a little more weight.

In other news Lyon could be interested in a talented young Chelsea striker. The BBC passes this nugget on:

The 21-year-old Burkina Faso international who has already played 28 times for his country (3 goals) has been on loan at Ajax this season and scored 4 times in 17 appearances which has apparently alerted the French side.

And, finally for now, in news that will warm the hearts of many to most Chelsea fans, there is a rumour doing the rounds that Frank Lampard could be one his way back to the club. 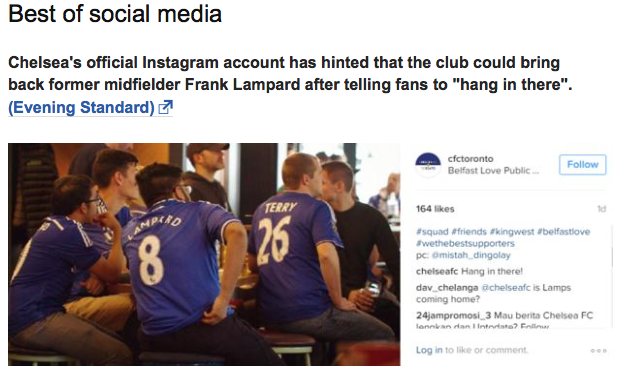