Chelsea appear to be getting ever closer to another blockbuster signing as media speculation intensifies about the re-signing of Romelu Lukaku.

Chelsea have seemingly been on the hunt for another striker all summer and even the capture of Michy Batshuayi hasn’t sated their thirst.

And The Daily Mail writes:

Chelsea have offered £68million for the Belgium international but Everton want £75m as reported in Sportsmail last month.

The report also states that the player wants to leave Everton this summer and has made that clear to some Everton colleagues.

And bookmakers SkyBet have Chelsea as 1/2, odds on favourites to bring him back to the club in this window. 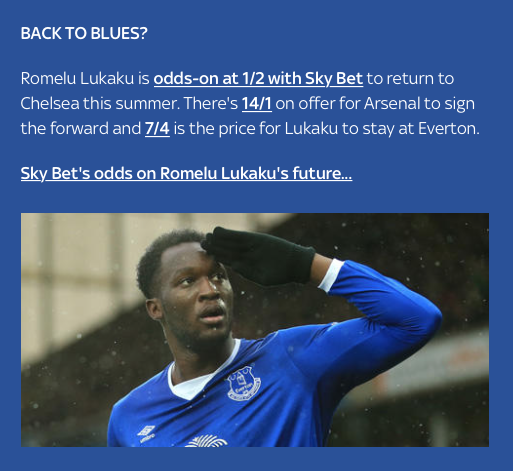 The Belgium international, who has scored 14 goals in 49 games for his country, left Chelsea permanently in 2014 after two successful loan periods at West Brom and Everton.

It’s difficult to believe that Chelsea didn’t put a buyback clause in his contract but the then manager, Jose Mourinho, didn’t seem too keen on the player.

During his time at Goodison the 23-year-old, who stands at 6ft 3in, has honed his talent and scored a notable 61 goals in 127 appearances despite his club suffering some protracted dips in form under Roberto Martinez.

TFF still has a small question mark about Lukaku’s technical ability – he hasn’t yet reached the level of a Didier Drogba – but he does have several compelling qualities which remind us of the Chelsea legend.

Lukaku is strong, athletic and has a wicked shot on him. His positioning is good and he scores goals from all angles.

There is little doubt that he will bring goals to Chelsea and his transfer fee can be in some way offset by his age and potential sell-on value.

But TFF would be hesitant about paying that sort of money for him.

Chelsea supporters: a good deal if it goes ahead?