It’s time for football fans and particularly Premier League fans to lick their lips in anticipation of another cracking game of clash of the titans.

Because, on the back of a brilliant game at the weekend between Manchester City and Arsenal, City now take on them might of title favourites Chelsea.

The fact that the game is at Stamford Bridge should make Chelsea favourites for this game but Manchester City can beat anybody on their day and they like to attack from the off so it should be a belter.

The stars have aligned beautifully for Chelsea and they remain largely injury free as they have done for most of the season.

Antonio Conte has been able to pick his best 11 for most games – especially the important ones.

Under his brilliant stewardship Chelsea have stolen a march on their Premier League rivals and they look in the best form of the season despite there inexplicable defeat at home to Crystal Palace.

The big question remains whether they play Pedro or William on the right hand side of the attack.

TFF still prefers Willian although Pedro has had such a great season that he has been first choice for most of it.

TFF thinks that this one could well end in a draw but if either team is to shade it then surely it has to be on fire Chelsea.

So here is our rather predictable line up for a game which could be one of the spectacles of the Premier League season. With Chelsea flowing freely and miles ahead in the league they can surely afford to let the handbrake off and Manchester City desperately need points to guarantee a top four finish. 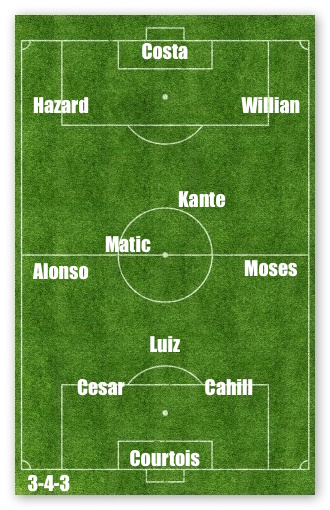