TFF fully expected Manchester City to beat Arsenal in the FA Cup semi-final at Wembley at the weekend. The fact they didn’t is completely indicative however of their up and down season.

We simply don’t know what to expect any more from Pep Guardiola’s side. They can be the best attacking unit in the league on their day but also lose inexplicably against weaker opponents.

It’s an issue which is going to have to be sorted out over the summer months and TFF strongly believes the Manchester City need to buy at least two more top defenders if they’re going to start to properly progress next term.

And they will be facing an interesting opponent on Thursday night in Manchester United. United will be without the top scorer Zlatan Ibrahimović but, in his stead, we should once more see Marcus Rashford.

Rashford has been a sensation again over the last few weeks and looks like the real deal who could offer 10 years of top service to Manchester United as a centre forward or a modern winger. His pace is genuinely frightening for opponents and sometimes even he doesn’t look like he knows what he’s going to do next.

If Manchester United can get the ball to him regularly he could seriously trouble a Manchester City side which has several injuries in their squad.

And Manchester City have genuine injury concerns for this game. Sergio Aguero, David Silva, Fernandinho and John Stones are all touch and go for this game. They all have a decent chance of making it however and the addition of those four will seriously galvanise the side.

In fact, with Gundogan, Sagna and Gabriel Jesus out for this game, these four could be the crucial factor in deciding the outcome.

But here is how we think that Manchester City should line up in order to combat the attacking threat of United and to cause their own damage.

Manchester City fans – is this your best available XI? 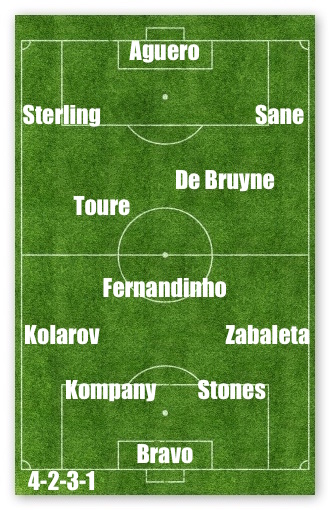