Liverpool have of course signed Fabinho from Monaco over the last couple of days to kick off their transfer spend early. It’s a small crumb of comfort after the huge disappointment of the Champions League final defeat but Fabinho will certainly get the Liverpool fans smiling in the new season. He can play at full-back but has excelled in defensive midfield over the last season and the situation with Emre Can means that this could be a like for like replacement.

Another name featuring heavily in Liverpool transfer speculation is that of Nabil Fekir. The Lyon conjurer has been on fire over the last 12 months and has found a place in an incredibly talented France World Cup squad.

If he comes in for around 60m Euros he would surely go straight into the starting line up. But how will Liverpool squeeze him into one of the best attacking front lines in Europe?

It’s hard to imagine that any of Firmino, Mane or Salah will be replaced so Liverpool may have to alter their lineup and formation somewhat. But Fekir is an adaptable attacker who can play at right wing, in the hole or up top.

Will Jurgen Klopp consider a 4-3-3 with Fabinho and new signing Naby Keita eventually edging out Jordan Henderson? It’s a difficult choice to make and perhaps Fabinho could get some minutes at right-back if Keita settles quickly.

But in this system all four of those superb forwards could start every game, with Fekir playing at the top of the midfield and Liverpool have a really solid look behind them.

Well, that’s if they replace their keeper. It’s such a bizarre oversight from an otherwise brilliant manager that Jurgen Klopp club has failed to sign a top-class keeper over the last two years. Time and again Mignolet and Karius have let their team down. Both of these keepers look substandard. 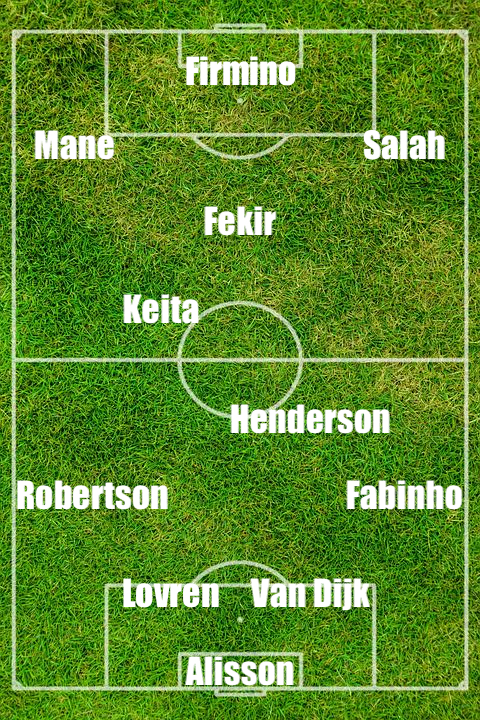 Roma’s Alisson has been strongly linked to the club and if Liverpool can prise him away then they will be adding another really good Brazilian to the side. The current asking price could be prohibitive but if Liverpool can get all these deals over the line they are going to have an embarrassment of riches in midfield and up top. Let’s take a look at how they might line up with all these new players coming in.

Liverpool fans – will this team challenge for the title next season?