The Manchester Evening News reports, in no uncertain terms, that a deal for Paul Pogba to join Manchester United has been agreed and that the clubs are set to announce the deal.

Manchester United are set to announce the word record signing of Paul Pogba from Juventus.

TFF supposes that a transfer of this size – it will smash Manchester United’s previous biggest purchase of Angel di Maria by a whopping £40m – was always going to take time to sort out.

But it may well be inching to a conclusion as Pogba himself prepares to leave his holidays in America to conclude the terms of his medium-term future. And MEN tweeted that the player has signed for the club with an official announcement coming any time. 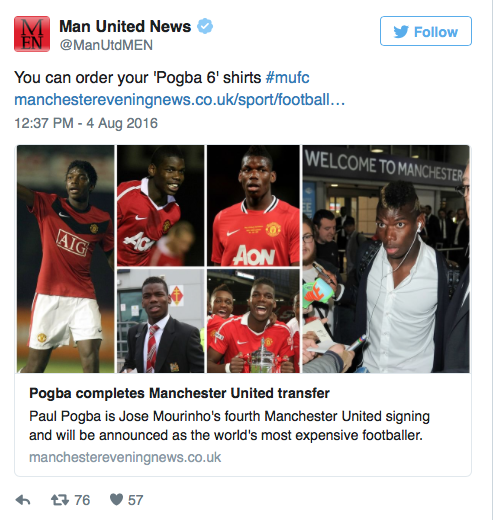 And on their live blog today they stated:

Pogba to United is done

While they have been known to be very, shall we say, ‘keen’, with some of their headlines in the past, there is no doubt that The Manchester Evening News enjoys a very close relationship with Manchester United and that the club respects and trusts the media outlet.

The relationship is perhaps similar to that of Marca and Real Madrid.

While Manchester United fans will want to see him in the shirt (again) before they really sleep soundly again, they may now start to breathe a sigh of relief that Pogba is not going to Real Madrid and will instead join up with the Jose Mourinho revolution.

Let’s have a look at some of the howitzers that this truly box-office star has scored at Juventus.

Manchester United supporters: do you feel that this one is now finally over the line, or is there still a Spanish sting in the tale of one of the most protracted and biggest deals in history?