From day one we have been big fans of Ronald Koeman as a manager. He has the same class and clarity as he did is a football player. And he has progressed Everton this season in a quiet but efficient way.

Football is too often over complicated by managers and TFF believe that it’s all about having a brilliant front three. If you can do that then the rest takes care of itself and Everton already have a solid defence as their foundation for next season.

With the brilliant Romelu Lukaku possibly about to leave the club this summer Everton are going to have to invest heavily in their front line if they want to be challenging for Champions League next season.

But what was the strongest XI this time? Stekelenburg was decent in goal and Leighton Baines and Seamus Coleman were typically consistent in the full-back areas.

Ashley Williams looked like he had been in the team for years and he was ably assisted by Funes Mori at the back.

Morgan Schneiderlin was quiet and efficient as we would expect from such a player and he definitely goes into that best XI, even though he only played for half a season for Everton. Ross Barkley was excellent in the midfield and looks like he might finally kick on if he stays at the club next term.

Up top Romelu Lukaku, Kevin Mirallas and the young man Ademola Lookman were our top performers even though Yannick Bolasie was excellent before he got injured.

So Everton’s best XI needs strengthening up top next term but here is what we believe to be the strongest line up for the last campaign.

Everton fans – do you agree? 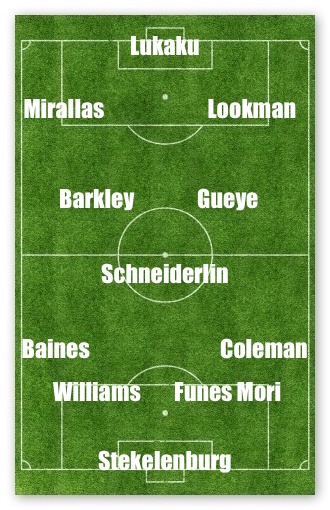