Manchester United will have more than one eye on the Europa League final next Wednesday when they embark on their final game of the season – a home match against Crystal Palace.

And TFF expects Manchester United fans to be in full voice despite the fact that they’ve had an unremarkable season in the league and will probably finish sixth.

That would have been seen as a disaster at the start of the season but the fact that they have taken a couple of trophies already – albeit the low hanging fruit of the Community Shield and the League Cup – means that a Europa League winners medal would surely represent a decent first season for Jose Mourinho.

Mourinho will not be taking any chances when Manchester United face Crystal Palace in the last match of the campaign. We fully expect Manchester United’s key players like Paul Pogba, Marcus Bashford and Michael Carrick to be rested for a game which means little to nothing in the grand scheme of things.

Mourinho will be hoping that the trio of Marouane Fellaini, Timothy Fosu-Mensah and Eric Bailly will be fit to start this game. They are all on the cusp of recovering from injury.

Because Fellaini and Fosu-Mensah won’t expect to start in Sweden. Meanwhile Eric Bailly is suspended for the final after a needless melee in the semis.

Alex Tuanzebe is another who was seen some minutes of late in the first team and we expect him to start the game after a promising first few outings for the club.

So here is a useful and experimental starting 11 from United in which we should get a glimpse into the future of the club. 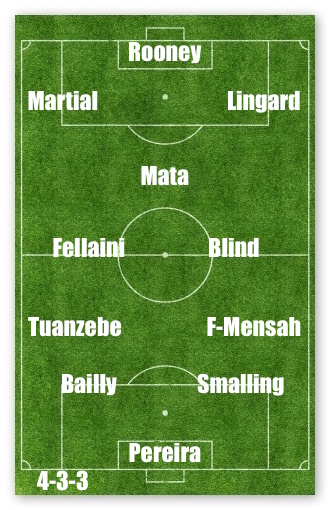