Paul Pogba’s agent, Mino Raiola, has been in yet more discussions with Juventus this afternoon in what we can only assume to be the conclusion of the finer points of a deal to take the Frenchman to Manchester United. 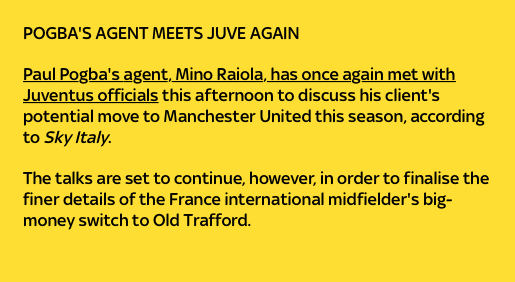 And The Guardian reports that:

Manchester United are preparing the contracts and documents to finalise the signing of Paul Pogba from Juventus for €110m (£93m) plus add-ons.

It’s been a painful slog for those of a red persuasion and the common wisdom in this deal is that the fee has now virtually, if not officially, been agreed and is somewhere around 110m Euros with a further 10m Euros in performance-related bonuses. On top of that, Juventus are apparently asking for 5 million more Euros if Pogba signs another contract with United after his first 5 year term is up.

The player’s wages seem to have been agreed some time ago and it looks is if Pogba will pocket around £290,000 per week when his image rights are included.

The final hurdle appears to be the fees of agent Mino Raiola who seems to be asking for around 20% of the transfer fee. A man of this business acumen is unlikely to buckle to any pressure and Juventus may end up paying a small part of that fee, with Manchester United footing the lion’s share of the bill.

It all makes the mind boggle, but if Pogba brings silverware back to Manchester United, few Reds will be complaining.