Pointless? Pretty much. Fun? Definitely. Difficult? I should cocoa!

But picking a strongest combined (and available) XI from the current Manchester United and Manchester City squads does tend to give us an idea about the balance of power between these great clubs.

The last 4 or 5 years have seen such selections dominated by Manchester City players. Even when they have underperformed as a team they have tended to have superior individuals in their ranks, as United have fumbled around for a successful formula post Sir Fergie.

So who makes the cut?

Not even the most single-minded Manchester City fan could argue that a 33-year-old journeyman – signed for a frankly stupid amount of cash – would get in ahead of the almost peerless De Gea who regularly springs like a cat, catches like a wicket keeper and distributes the ball like David Silva.

Even half fit he has more depth to his game than Clichy and Kolarov. Happily for Manchester United fans, he’s more than half fit and starting to once more resemble a top winger, never mind a top left-back. He did get a muscle niggle on international duty but should be OK for the derby.

What a find by Mourinho. The price paid smacked of desperation when Manchester United signed the Ivorian but it’s already clear as day that he’s an absolute gem. At 22, Bailly reminds us of Nemanja Vidic. But with more pace, better technique and believe it or not, more aggression. When commentators talk about Bailly kicking players into Row Z they may not always be speaking figuratively.

A Rolls-Royce of a defender who has already proven that he can marshal the Manchester City defence for a decade. A fully fit Vincent Kompany alongside Stones would be some partnership.

Manchester United’s Antonio Valencia is off to an absolute flyer this season at right back. But he can still look, at times, as if he has been drafted in from a semi-professional army team. Sagna has more finesse and just edges it. Cue a man of the match performance from Tony V….

One of Manchester City’s best signings over the last five years and a comparatively unsung hero of many of City’s successes. He’s technically excellent, has a great engine and is a true team player.

Manchester United fans have only seen a tiny amount of what Pogba can do. He will be bossing games and scoring belters for years to come.

His club and international managers seem reluctant to play Rashford out wide. But his pace and dribbling ability would surely be ideal for either flank – as proven amply with his two goals initiated from wide positions for England U21s in the week. He’s simply too good to ignore and, even though he can admittedly make a huge impact coming off the bench, leaving Rashford out of the starting XI would be as daft as overlooking a similarly aged Wayne Rooney.

In truth it’s not even a close call between Silva and Rooney right now. Despite a decent start to the season Rooney looks leaden-footed. Has he simply played too much football? Or have the Red Bulls caught up with him? Most pros don’t play regularly until they are into their 20s. Rooney was a regular for Everton at 16 and has been a nailed on starter ever since.

A tough call between De Bruyne and Anthony Martial. On his day the Frenchman is a better player. But he has started the season slowly.

Had Sergio Aguero been available he would have been in TFF’s XI. But Zlatan seems to be in his pomp at 34 and is showing no signs of slowing. What a player. And what a match-winner. City beware. 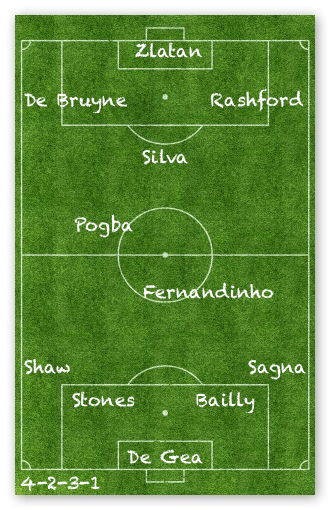