Whatever your thoughts on British Media Outlet, The Sun, it’s difficult to argue with the idea that much of their creative resources go into their regularly colourful headlines.

This one turned up the corners of the collective TFF mouth this week as Wayne Rooney was caught on camera looking a little worse for wear having gatecrashed a wedding in the hotel where the England team were staying after the Scotland game. 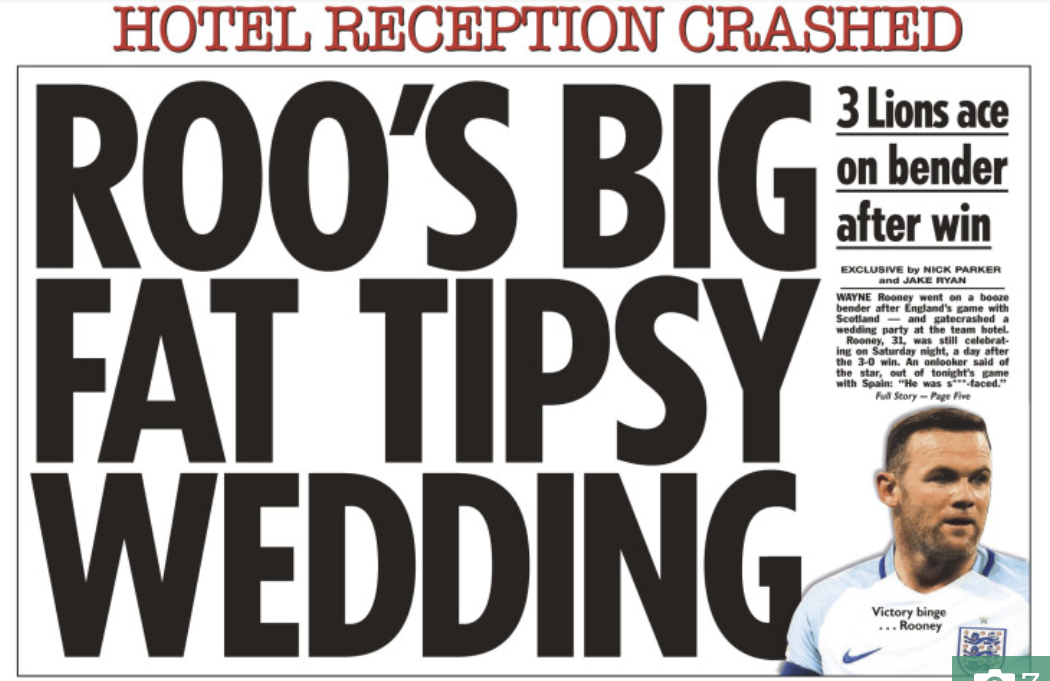 But, while the headline generated some mirth, Wayne Rooney certainly wasn’t laughing and apologised unreservedly for his behaviour which, while nothing out of the ordinary for the man in the street, is deemed unacceptable in the crazy spotlight of modern football. The Guardian wrote:

Wayne Rooney has apologised “unreservedly” to the Football Association after he was photographed socialising in the early hours of Sunday morning – with the governing body vowing to review its policy of granting players downtime during international breaks.

And related of otherwise, The Mirror kicks on with the story to suggest that Jose Mourinho will once again bench the fading superstar when Manchester United play their crunch tie against Arsenal at Old Trafford in the lunchtime kick off this weekend.

TFF had assumed that the player would start this one, especially with Zlatan suspended after picking up five yellow cards in his short Manchester United career.

Rooney was in form against Swansea two weeks ago and his experience could prove vital in a game which Manchester United surely must win.

It remains to be seen if he will play but TFF definitely concurs with the idea that Manchester United need to play Marcus Rashford at number 9. The Red Devils best chance of winning this one is to deploy the pace of the English youngster alongside the blisteringly quick Anthony Martial.