Manchester United ended a patchy run of three successive draws to hammer yet more nails in the coffin of hapless Leicester at the weekend. And a 3-0 away win was much more like it from Jose Mourinho’s men.

The Manchester United boss was quick to point out that this team hasn’t lost in the league since October and they do look very hard to beat at this point.

But goals and fluency have been hard to come by and this result will have particularly pleased the boss, with Liverpool and Arsenal both losing in this round of fixtures.

And, given United’s profligacy in front of goal it was once again strange to see Anthony Martial sitting on the bench and unused for the 90 minutes.

Manchester United fans will unanimously hope that player and manager can find some harmony over the coming weeks because no one would want to see such a wonderful talent leaving the club.

Many will hope that Mourinho is schooling Martial with tough love ahead of what looks ever more like a grand end to the season.

With Manchester United still involved in three cups and a league battle they will have no shortage of games to play and TFF would like to see Martial start against a stubborn Watford side at the weekend.

He could be exactly what United need to get ahead early and dictate the game from there. Because breaking the deadlock has too often been United’s problem this season.

In terms of injuries Manchester United have Wayne Rooney (illness) and Phil Jones (foot) currently out but both should be able to take part at the weekend.

So here is our XI to get three more vital points and at least gain some points on Tottenham and/or Liverpool who face off this weekend. 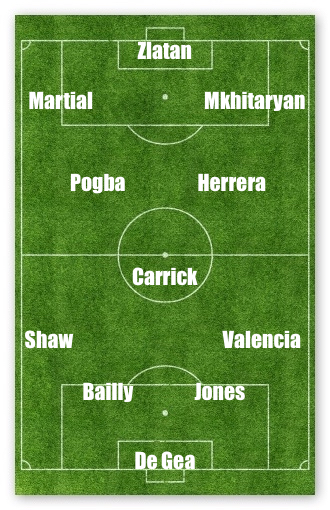