Things went terribly to begin with in Jose Mourinho’s Manchester United career. Three defeats in a week was the nadir but since then they’ve pulled things around and 2017 has more promise than any of the previous three seasons.

We all knew that the Portuguese was a top quality coach and sooner or later the cream always rises to the top.

Manchester United haven’t exactly clicked into shape yet but there are some definite portents that they are moving forwards and looking like a team with purpose once more.

The sideways passing has slowly dissipated and Manchester United now get the ball forward with much more speed and penetration.

World record signing Paul Pogba is settling in and starting to dominate games in the midfield. And Armenian captain Henrikh Mkhitaryan looks like one of the most dangerous players in the Premier League when he’s on form.

The defence is also shaping up nicely and Manchester United may well add another player to the back line in the January transfer window.

But we fully expect United to get a place in the top four come May and they have a great chance to win the Europa League in what will be a successful first term under new management.

So what’s the best XI so far you scream? Well this is TFF’s stab at it and we think that this team could go along way in the second half of the season if they are given time to play together. 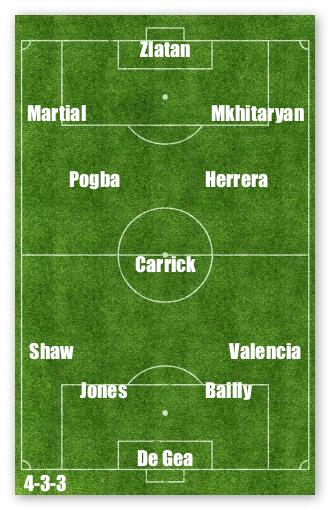