Manchester City will look to kick on this summer and that probably means digging deep into the club coffers again as Pep Guardiola looks to mould a perfect side. And Manchester City have been linked with three Tottenham players over the last week who could really make a difference to the side.

TFF thinks that major surgery needs to be done on their full back areas as the likes of Kolarov, Zabaleta, Clichy and Sagna are all reaching veteran status.

On April 1st this reports emerged from The Manchester Evening News and TFF thins that, while a deal for Spurs’ prized assets is unlikely, they would be the perfect additions.

Pep Guardiola claims England are embarking on their next golden generation – singling out Danny Rose, Kyle Walker and Dele Alli as examples of the exceptional emerging talent.

The 26-year-old England international (12 caps) has mercifully fulfilled his vast potential where so many others fall by the wayside. His natural attributes give him the power and athleticism tone a solid defender and a brilliant attacking outlet for Tottenham. He’s coming into his prime and we should see the very best of him over the next few years. He would certainly add pace and dynamism to the Manchester City flanks.

For so long Walker was all of poise going forward but an accident waiting to happen at the back. He seems to have shaken off those inconsistencies in the last 18 months to cement displace in the side for club and country. He’s payed 25 times for England and 221 times over eight seasons for Tottenham. He’s got sublime acceleration down that right fan which puts opponents on the back foot.

It could easily be argued that Alli is the best player to emerge from England since Wayne Rooney. The natural talent of this young an is remarkable and he makes the game look easy. He threads the game together beautifully and scores ridiculous goals. He seems to be attracting the attention of some of the biggest clubs in the world and this could be an uncomfortable summer for Tottenham fans.

But with Champions League football almost guaranteed for Spurs at this point of the youngster has every reason to stay in London beyond the summer. 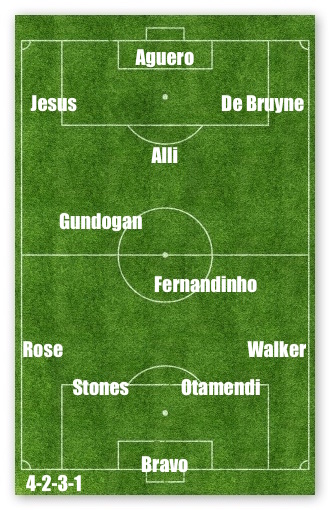 Let’s see the dazzling Alli in action. Manchester City fans – who would he displace from the current first XI?