Manchester City could easily be the biggest spenders in the Premier League again this summer as they look to address various problems in an otherwise superb side.

The midfield looks a little bit aged with Yaya Touré and David Silva in their thirties. That has been partly addressed by the acquisition of Bernardo Silva from Monaco in a 43.6GBP million deal earlier this week. He looks more like David Silva than Toure and will add craft and youth to a midfield for the next 6-8 years.

Fernandinho should continue to anchor the midfield magnificently. And the fullback areas also need to be addressed with Gael Clichy and Bacary Sagna leaving the club this week after that their contracts came to an end. Kyle Walker has been strongly linked to the club as has Benjamin Mendy of Monaco. These two would be superb additions to the side – speedy, athletic and robust players who can also attack just as well as they defend.

And with Pep Guardiola being such an attack-minded manager it’s difficult to imagine them not adding another attacking player to the lineup before the start of the new season. Quite how they would fit in another forward remains to be seen but the most likely victim may be Sergio Aguero.

But with Gabriel Jesus coming back into the fold Manchester City are going to look so strong going forward.

City will surely add another goalkeeper and to that end Kasper Schmeichel has recently been linked. So here’s how Manchester City could line up in the new season.

Manchester City fans – is this stronger than the current side? 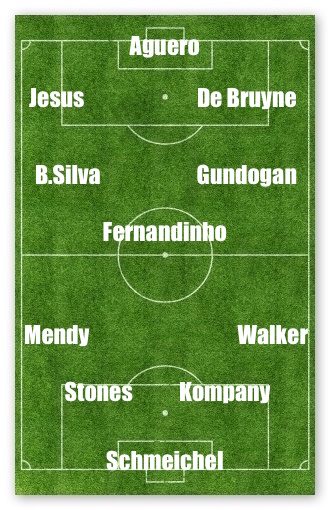