We all know that Yaya Toure was left out of Manchester City’s Champions League squad for the first part of the competition.

Until the weekend there seemed little odd about that decision as the expectation was that the veteran would be well off the pace.

But Toure defied belief by returning on Saturday with a decisive brace against Crystal Palace and reminded us all why he is generally regarded as one of the best midfielders in Premier League history.

This guy doesn’t need to do much running – which is fortunate because he seldom does – as his quality on the ball is amazing.

And he could be set for a recall to the European squad for the knockout rounds.

Alas, he won’t be available for the last two games of the group phase and this simply reminds us what an embarrassment of riches this squad possesses.

Manchester City only have Vincent Kompany and Fabien Delph on the treatment table right now so they are looking strong and Guardiola has the regular, enviable selection problems.

The German side are just 3 points behind City in Group C and even Celtic can still qualify. But a win here will all but put this group to bed.

So Manchester City will surely go with their strongest available team. Here is how TFF sees them lining up.

Manchester City fans: is this the team to get the job done? 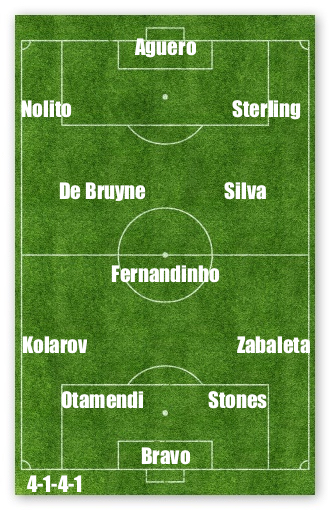