Manchester United released their provisional squad numbers for the season yesterday but not before Zlatan had characteristically leaked details of his own number to the world. 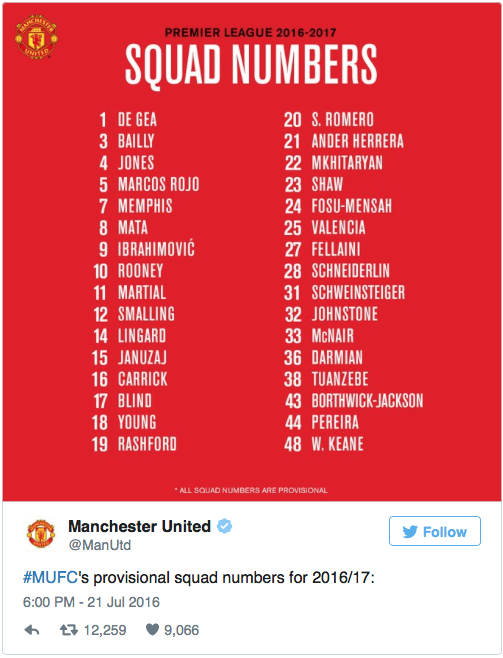 And while TFF is at pains to point out that these numbers are provisional, you will see two glaring omissions from the lower numbers.

It is generally accepted that Jose Mourinho wants to sign a central midfielder and Paul Pogba is the number one choice. He will surely wear the number 6 shirt if a deal is completed.

But that still leaves the number 2 shirt vacant.

TFF would expect that it would have been snapped up by Luke Shaw, Timothy Fosu-Mensah or Matteo Darmian had Manchester United not had other plans for it.

But it remains unfilled which leads us to think that, although Jose has spoken of making just the four signings this summer, he has his eye on the potential addition of another defender if the right opportunity presents itself. Earlier this month he did allude to the idea of keeping his ear to the ground even after making the fourth capture:

“From these targets we have three, until we have the fourth we are working hard on that, with Mr Woodward and the owners. When we have them we will breathe, we will be stable, and the market will still be open.”

Many a Manchester United fans would love to see John Stones fill the shirt. It’s a transfer which has regularly and recently been mooted.

It may be a little optimistic to think that United would bring him in as well as all the other superb and expensive talent that is arriving this summer.

But John Stones would be a superb, long-term acquisition and a defence of John Stones, Eric Bailly, Luke Shaw and Timothy Fosu-Mensah could reign supreme for a decade, shutting up shop at the back and providing the perfect blend and foundation for United to cause havoc at the business end of the park.

Manchester United would surely have to sell if they wanted to bring Pogba and Stones to the club. But it would represent remarkable business and United would be in rude health in all departments.