Manchester United have reportedly been quoted the princely sum of £78m to re-employ the services of Paul Pogba this summer according to The Daily Mirror who say:

But the club are willing to go all out to sign the player and will stump up the cash if they can get their man, according to the source.

…they are prepared to bankroll the deal because Jose Mourinho wants to rebuild United’s midfield around him. 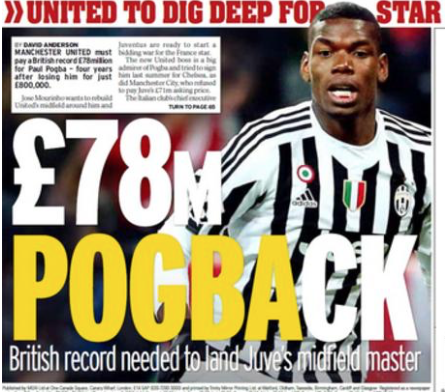 It’s difficult to argue with the notion that Paul Pogba would noticeably improve the midfield. And at just 23 (he only turned 23 in March) he could set the tone for the great side which Jose seems to be intent on building.

With 22-year-old Eric Bailly coming in for £30m on Wednesday the belief grows that Manchester United have tasked Mourinho with not just building a title winning side but one which can stay together for 5-8 years and truly dominate in a way that Barcelona have in Europe over the last decade.

Speculation does of course continue to surround Zlatan’s move to Manchester United. While he wouldn’t fit into that category of long-term investments, it does make perfect sense to sign a prolific and experienced marksman for an attack which, while talented, is still learning the ropes.

Although Pogba’s fee wouldn’t get much bigger, a big tournament in EURO 2016 – where France are the hosts – could see the likes of Real Madrid and Barcelona step up their efforts to sign the player.

So Manchester United will be wary of trying to get this one over the line as soon as possible.

But the introduction of Jose Mourinho has clearly lifted the gloom at Old Trafford.

He seems to attract players and it’s difficult to imagine Manchester United not progressing quickly under the Portuguese master.

We can envisage Old Trafford becoming a fortress again at very least next season.

Manchester United supporters: is he worth the money or would the cash be better spent elsewhere?