After three years of serious disappointment, any short-term progress is viewed with caution by Manchester United fans.

And the start of the Jose Mourinho era has not been without challenges.

But there was a definite sense on Sunday that Manchester United were returning to the sort of intense, quick and direct football that was a hallmark of the great Sir Alex sides.

Despite the result Manchester United were quicker in possession than in recent memory and got the ball from back to front without the sort of dilly-dallying that became synonymous with the Louis van Gaal era.

What was lacking, until Anthony Martial appeared off the bench, was the incisive killer instinct in front of goal.

Of course, in Zlatan, Manchester United have the ultimate killer and he will be his own worst critic where it comes to the miss, in the second minute, which really set the tone for a day of dreadful profligacy in front of goal. Had that gone in, we may well have seen an avalanche of goals.

Manchester United used to be so good at breaking the deadlock early on in games. And this is so important because it forces the opponent to come out and play, leaving space behind their defence for further chances.

But Stoke were happy to sit behind the ball and the longer the game went on the more desperate United became.

Jose’s selection was generally good and, mercifully, we weren’t subjected to another appearance from Marouane Fellaini. Manchester United are an immeasurably more sophisticated side without the Belgian and TFF would happily pay to see him leave the club.

But the continued benching of Anthony Martial for Jesse Lingard makes no sense. Martial is United’s most dangerous player and his killer instinct was there for all to see within a minute of his arrival as he curled a beauty into the far corner with one of his first touches.

Manchester United’s strongest XI clearly features him and not Lingard who, for all his willing running, provides no real danger to the opponent. Ask any Premier League defender who they would rather face and TFF believes that the response would be unanimous.

Finally, we haven’t seen much of Henrikh Mkhitaryan yet but he’s a top player – a more robust creator than Juan Mata and more fleet footed than Rooney, with the added ability to drift past players with the ball at his feet. He will be in the starting XI before long.

So here is what TFF believes to be Manchester United’s strongest XI for the rest of the season. When will Jose pick it?

United fans: is this the best XI? 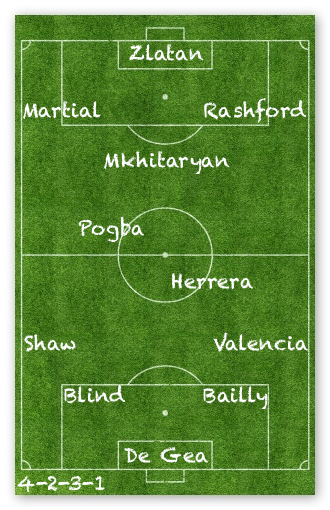