After an encouraging start Jose Mourinho’s Manchester United are faltering badly and questions are already being asked about the wisdom of certain selections.

Any regular reader of TFF will tell you that we have never been big fans of Jesse Lingard. And at least Jose Mourinho has had the good sense and judgement to pull him from the starting XI once his obvious weaknesses were laid bare against Manchester City.

But one player who Mourinho ostensibly remains completely blinded by is ‘The Big Belgian’ Marouane Fellaini – what a useless lump of a footballer. As soon as he arrived at Manchester United TFF had a feeling that the following period would go down as ‘The Fellaini Years’ and not for complementary reasons. This man never fails to drag the quality of a football match downwards.

Mourinho clearly appreciates the size of Fellaini. But that is really the only box he ticks in top level football terms. Until Jose gets rid of Fellaini Manchester United are going to be ever susceptible to mediocrity. Would he get into the Chelsea, City, Liverpool or Arsenal sides? No way. Tottenham, Leicester, Everton? Very unlikely. So why is he still deemed good enough for big spending United?

With Blind and Carrick absent against Watford Manchester United had no sharp passing out of the defence. No quick, quality ball to get United on the front foot in a split-second, to exploit the pace of Rashford, Martial, Pogba and Shaw.

It’s such an obvious weakness about this side and yet another weakness in Fellaini’s game. He doesn’t have a sharp football brain and isn’t a quick, varied or accurate passer of the ball.

Surely Jose must try other options in defensive midfield. Any of Herrera, Carrick, Schneiderlin or even Rooney would be better suited to the role.

And that brings us nicely on to another who simply isn’t doing the business.

Wayne Rooney has always been one of TFF’s favourite players and, as such, we have given him a lot of slack through his protracted period of poor form.

But, for all his achievements, Rooney currently looks like a punch-drunk boxer. Everybody knows that he has lost his pace. But, far more worryingly, Wazza seems to have lost his speed of thought – that very football brain that made us previously feel confident that he could play into his mid-thirties.

But he’s been treading water for far too long. He no longer has the speed to play in attack and, at just 30, TFF feels that the only possibly position left for him at Manchester United is in the anchor man role that Fellaini fills so horribly.

TFF would be tempted to put the 35-year-old Carrick there first. But Rooney is still a hard worker and someone with an irrefutably good pass. If he can find some form he may yet suit that role for a few years.

With him shielding the defence, Pogba and Mkhitaryan could play their natural roles in the advanced midfield of a 4-3-3.

It’s been a harrowing period for Jose Mourinho and Manchester United have looked awful of late.

But they do now have a lot of top players and The Special One will find the winning formula eventually.

And TFF thinks that this is the right XI moving forward. Manchester United fans: thoughts? 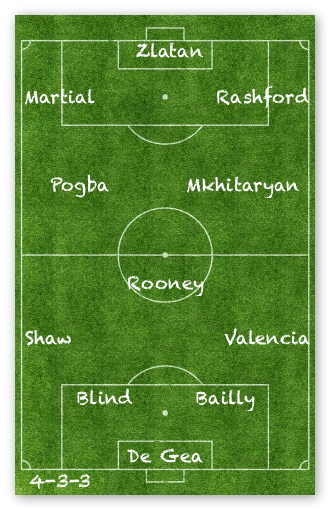