This will send tingles down the spines of Manchester United fans everywhere.

The youth teams have of course produced some amazing talent down the years but there has been a sense that the conveyor belt has slowed over the last few years.

But this could be about to change if Callum Gribbin fulfils his potential.

The 16 year old left-footed forward has been drawing admiring glances with his academy performances and the man who coached the youngster in the Salford U16 and U17 teams has spoken about him in glowing terms.

Quoted by The Bleacher Report, via The Manchester Evening News, Kenny Swain said:

“I heard about Gribbs through our scouting network and everyone would say, ‘You have to see this lad, he is similar to this player, or that player,'”

“Then I’d go and look at him, then within five minutes, you can see that this boy is something special.

“He can take it under pressure anywhere. The best players tempt the opposition into the challenge, and it is all about the timing of release, which Gribbs has to a T, way beyond his years.

“Not many kids can deal with him or want to deal with him. He just sends them the wrong way and makes them look foolish. He leaves me breathless.”

At 16 you may feel that he is years away from making the first team at Manchester United. Certainly history would tend to suggest that most players don’t get a shot until they are 19 or 20.

But there are of course exceptions and freaks of nature who can step up to the man’s game while still without a driving license.

Wayne Rooney is the case in point and while Gribbin doesn’t have the physique of the Manchester United and England captain did at 16, he looks as if he has maturity way beyond his years.

Louis van Gaal loves to give youngsters a chance and, if Gribbin keeps performing to this standard, it may not be out of the question for him to get some minutes in a Capital One Cup game next season.

But for now he is keeping his feet on the ground and working hard, as his Twitter account suggests: 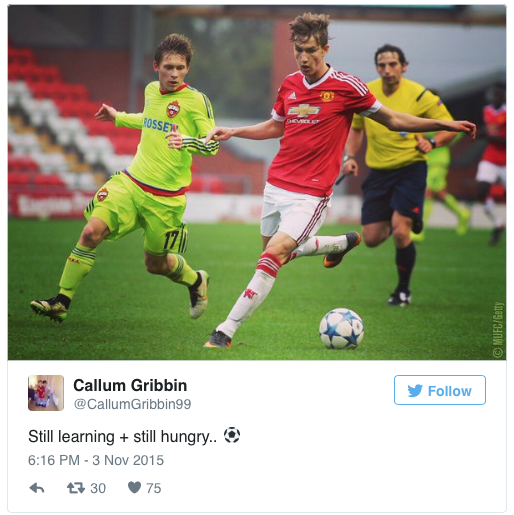 You can see some of his skills here