Picking a greatest Manchester United side ever is not an easy task.

But it’s much fun trying! So here goes.

As with every position in the side, this one is fiercely contested. Edwin van Der Saar was a master. David de Gea looks like a younger and even better version of the Dutchman. And Harry Gregg was a wonderful player in his time.

But, for his sheer mouthy bullishness and presence in the back line, twinned with comparable raw talent to the aforementioned, Schmeichel has to get the vote.

He organised his back line brilliantly, scared the life out of the opposition and made himself the size of a house in the goalmouth. A wonderful player and a great leader.

‘What? No Irwin’ I hear you scream. But, lest we forget, Irwin was right-footed and, like all great managers, we have found a place for both the legends!

Evra was a Manchester United full back of the highest calibre. He was adventurous, pacy, mobile, great going forward and had the never-say-die attitude of all the true United legends. A genuine warrior who married craft with graft.

This team may already look a bit disrespectful to the older generations of Manchester United stars. But let us not forget that the last 25 years have been easily the most successful in the history of the club.

And Rio Ferdinand quite literally ticked all the boxes as a centre back. He was pacy, strong and dominant in the air. But he also had ball skills that would put many a striker to shame. He was a Rolls-Royce of a player and worth the entrance fee alone.

Another ridiculously difficult choice to make with the likes of Steve Bruce and Nemanja Vidic waiting in the wings.

But he’d be the perfect partner for Rio and Stam had the lot. He was one of the most powerful players in the Premier League era. But he also had great pace and technique. An absolute beast who did the dirty work sublimely and his premature release from the club was one of Sir Alex’s biggest mistakes.

As solid as they come in defence but loved to get forward and whip in devastating crosses. He was quick, rarely tired and had a great free kick on him.

Despite Manchester United having a phalanx of superb left-sided players through their history, Giggs was one of the easier choices to make in this eleven. Because he is, quite literally, Manchester United’s most decorated player of all time. In his 23 years in the first team he won 13 Premier League titles, 4 FA Cups, 2 European Cups, 4 League Cups, The World Club Cup, The UEFA Super Cup, The Intercontinental Cup and 9 Community Shields. He played 963 games for Manchester United ands scored 168 goals. And, even when he finally retired, TFF felt that he had more in the tank!

Sir Alex surely described him best when he said:

“I remember the first time I saw him. He was 13 and just floated over the ground like a cocker spaniel chasing a piece of silver paper in the wind.”

He may not have had the longevity of some other Manchester United heroes. But it is a testament to the wonderful talent of the player, who was so cruelly cut down prior to his pomp in the Munich air disaster, that he gets into our team ahead of Bryan Robson and Roy Keane.

Even at 21 he was a beast of a player who may be likened in modern football to a mix between Yaya Toure and Keane at their best. He would have dominated games for a decade. 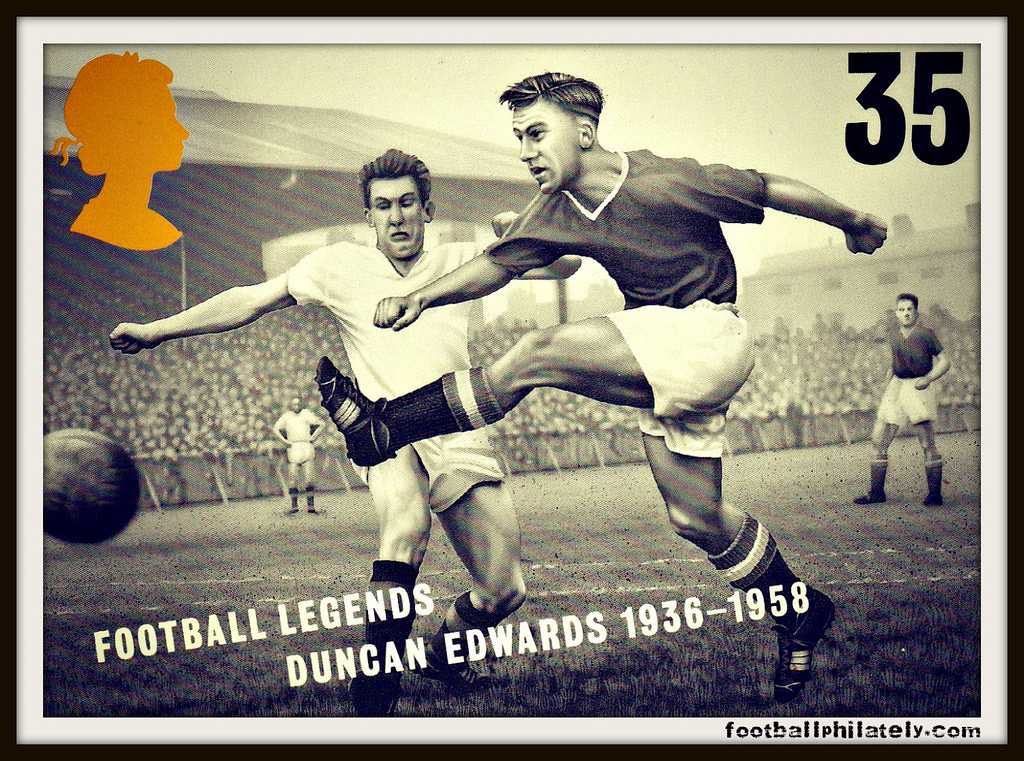 Another fairly easy choice to make because of his talent and longevity. He didn’t quite have the same size of trophy cabinet as Giggs, but was as important to the club through the most successful period in their history. He scored goals, ran the midfield and pinged laser-guided shots around the park for well over a decade. He was a manager’s dream.

This quote, from Zinedine Zidane shows how highly regarded he was:

“There is no doubt for me that Paul Scholes is still in a class of his own. He’s almost untouchable in what he does. I never tire of watching him play. You rarely come across the complete footballer, but Scholes is as close to it as you can get. One of my regrets is that the opportunity to play alongside him never presented itself during my career.”

How marvellous it would have been to see Best and Ronaldo on the same team sheet. Best strolls into this XI ahead of the likes of Wayne Rooney and Eric Cantona. Because he had a similarly imperious first touch and goalscoring capacity but also had that amazing dribbling skill about his game. He also played in a time when forwards got nothing like the same protection from referees as they do today. George Best is among the best 5 players of all time. He was a true master of his sport. His talent was up their with the likes of Messi, Maradona and Pele.

We have thrown him in on the right wing to shoehorn the others into the team and because he could play anywhere in the attack. 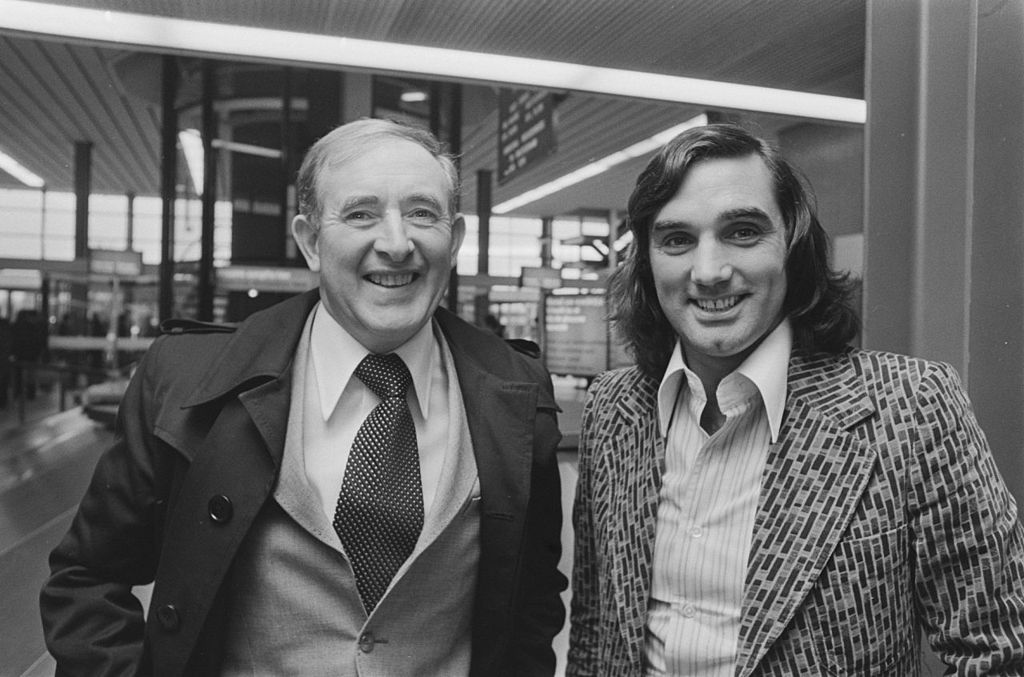 Bobby Charlton epitomises everything great about Manchester United. He was a player in their best traditions with his skill, fearlessness and buccaneering football. He grabbed games by the throat, scored incredible goals and played for the club for 17 seasons. An attacking midfielder with 260 goals in 807 games for the club, he is one of the true greats of the game and goes into our team at number 10.

Denis Law. Ruud van Nistelrooy. Rooney. Cantona. Each of these guys would be superb number 9s in this incredible team.

But there can be little dispute that Ronaldo belongs at the very highest level in the hall of Manchester United greats. In the last 3-4 four years of his 6 at the club he kept United head and shoulders above the rest in the same way that Lionel Messi does at Barcelona.

Ronaldo scored 118 goals in 292 games United and forced every opponent on to the back foot with his pace, bewitching skills and direct football. At United he won 3 Premier Leagues, 2 League Cups, 1 FA Cup, 1 Community Shield, The Champions League, The World Club Cup and several player of the year awards. He was quite literally peerless in his time in England.

He started as a winger at the club but Manchester United’s best teams down the years have been in 4-4-2 formations and Ronaldo has to go in up top to squeeze the others in.

So here it is. TFF’s best Manchester United XI of all time. United fans: any huge oversights? 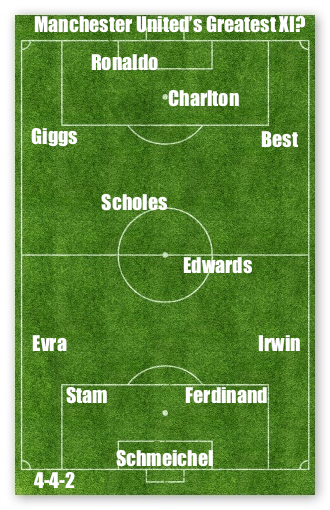