It’s been a topsy-turvy season for Manchester United and if TFF had suggested that they would have finished sixth at the start of it then most would’ve been disappointed.

But when you add the Europa League win and the League Cup win to a Community Shield victory in the opening game then it has to be seen as a positive campaign for Manchester United. Not only have they found their way back to the Champions League – albeit through the back door – but they have brought some brilliant players in and will do that again this summer.

TFF strongly believes that Manchester United will be challenging for the title next season and turning those draws into wins.

To do that they’re going to need to improve the forward line and there’s been a huge amount of speculation about who they might sign in the summer. Expect big money to change hands again. But who get into our best Manchester United XI of this season?

Well despite a solid performance in Europe for Sergio Romero, David de Gea has to get the nod in goal. He’s the best player in the world and his position.

Antonio Valencia has been sensational as has new signing Eric Bailly.

Phil Jones and Chris Smalling had a decent innings as well but we have to give the other spot at centre back to Marcos Rojo who has been a surprise package for Manchester United this season.

On the left Matteo Darmian just about edges it in an area where no one has really shone.

The midfield has been solid again this season with Michael Carrick, Paul Pogba and Ander Herrera taking the plaudits.

And upfront Marcus Rashford has to find a place in that strongest XI – he hasn’t always started but he’s been superb when he has appeared in the side. Zlatan was Manchester United’s top scorer and obviously has to go in there. And while no one else has really shone consistently through the whole season Henrikh Mkhitaryan had moments of genuine brilliance and would probably squeeze into our side for that final berth.

So here is our best XI for the season. Manchester United fans – do you agree? 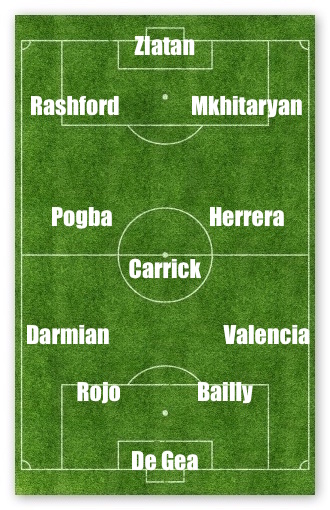