Manchester United trundled on in the Europa League at Old Trafford on Thursday night as they squeezed their way through to the semi-final after 120 gruelling minutes against a defiant Anderlecht side.

And with United having played over 50 games now this season injuries are starting to take their toll.

Marcus Rojo had a nasty collision with an opponent in the second half and had to come off. The Argentinian has been a stalwart for Manchester United this season and, in the absence of Chris Smalling and Phil Jones, he’s been a vital component in the centre of the defence.

Although it looked like little more than an impact injury Rojo was clearly in pain and TFF would be surprised if he was fit to play this weekend against a stubborn Burnley side at Turf Moor.

Dutch international Daley Blind took his place and there is less solidity about the defence with the slight pass master in there instead.

The other key injury was to Zlatan who also came off with a twisted knee towards the end of the game.

Thankfully Manchester United are well catered for at the top end and can bring in the likes of Anthony Martial and Wayne Rooney to the forward line.

But it’s hard to look past Marcus Rushford as the perfect replacement for the Swedish international. Rashford scored the winning goal against Anderlecht on Thursday night and looks as sharp as he ever has for Manchester United. He now has 10 goals for the club this season and may end it with quite a few more.

Luke Shaw was included from the start on Thursday night and added dynamism down the left hand side. TFF would like to see him play again. So here’s our team for a tough looking away trip against a side that doesn’t drop too many points at home. 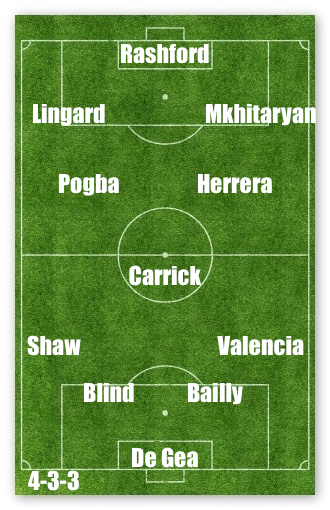