Even the more optimistic amongst the Manchester United faithful didn’t have the greatest confidence that the latest mini-revival could lead to something special under Louis van Gaal this season.

The Manchester United manager was happy to take much of the credit for exposing a recent flock of youngsters to the first team:

“Now I have read that Rashford is saving me,”

“No. Rashford is thanks to my policy and the club, of course, has proved that.”

…but it was he too who, a few weeks ago, defended the team’s form by stating that United had been top of the league until injuries struck many of his senior members.

‘I think in March a lot of players are coming back and then we’ll have a full selection and with our full selection we were first in the Premier League,’

Some might say that he is clutching at straws and the latest limp performance, this time at WBA, has quickly dissolved any hope of a top four charge.

So, perhaps for both teams, this competition takes on unusual significance this season as the only realistic route for either into The Champions League next term.

Manchester United’s injury problems are easing at the right time in this respect.

While Wayne Rooney is still missing from the front line Louis could normally pick any three from Memphis, Lingard, Rashford and Martial for his offence on Thursday. Rather frustratingly for some, the United manager has tended to opt for the more steady Lingard over the explosive, if sometimes erratic, Memphis Depay. But the former is suspended for the first leg so we should see the mercurial Memphis from the off.

An away tie in Europe should see a rather defensive midfield shape and we expect Morgan Schniederlin to partner Michael Carrick in the engine room, although the return to fitness of Marouane Fellaini could see another baffling selection decision from a coach who is arguably way past his best.

Senior defenders are also returning to the Manchester United line up and we would be shocked if Chris Smalling and Marcos Rojo didn’t start, if fit.

With Daley Blind and David de Gea almost certain starters the only other question is who steps in at right-back. The inconsistent Matteo Darmian or the impressive Guillermo Varela. We like the latter on current form.

So here is the team that we think Louis will pick in a fixture that rarely fails to shake the rafters. 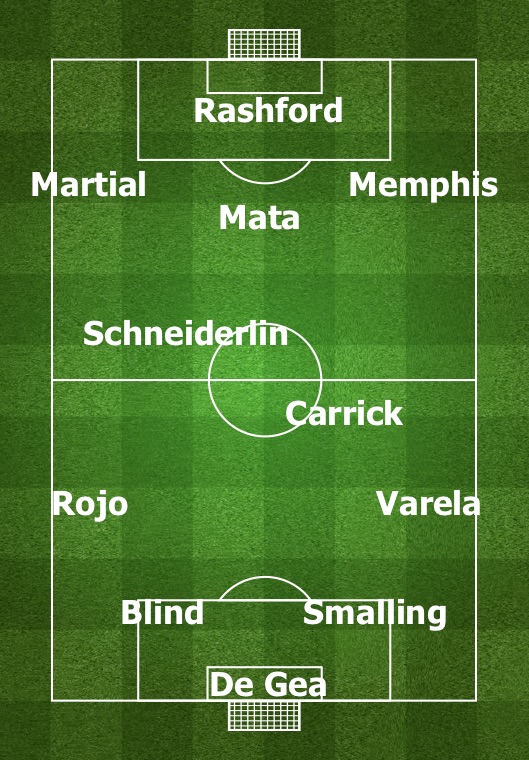