Manchester United fans will be relieved to hear that latest reports suggest that the club has no intention of letting Anthony Martial leave the club on loan or otherwise.

Worrying quotes surfaced on Wednesday in which Martial’s agent said that the players was listening to an offer from Sevilla.

“We are studying the Sevilla option in detail,” he said. “Sevilla are a very good club, are in a good position in La Liga, play in the Champions League and have a great coach. That’s all I can tell.”

But Manchester United have apparently spurned any interest at source according to British media outlet, The Telegraph, who write:

And they quote Mourinho as saying:

“People forget that Anthony is very, very young and last season Manchester United played completely different than we do today. He was basically playing up front. The team had lots of passive ball possession, waiting just for a moment to put it into space for Anthony to go and score a goal.

“This season is more difficult. I think he needs a little bit of time to improve. We have so many good players in similar positions — Martial, (Juan) Mata, Mkhitaryan, (Wayne) Rooney. I cannot give him four, five, six, seven matches in a row when I have other people on the sidelines waiting for a chance.

“I try to give him chances. In fact, I gave him good chances because I played him against Tottenham and Arsenal, in some big matches.

“It’s taking a little bit of time but he’s a great kid. He wants to improve. He’s a good professional so I have no fears — I’m sure he will be there.

It is natural that a player who was so central to everything Manchester United did last season to be frustrated about a lack of game time this term. And the hastiness of youth will perhaps have fuelled his desire to make a temporary switch in order to get more game time.

Martial has made 17 appearances for Manchester United this season and scored 4 goals. Many of those appearances came off the bench and the stats don’t compare favourably with last season when the Frenchman hit 17 in 49 games and was an almost certain starter when fit.

But Mourinho’s management of Henrikh Mkhitaryan has proved that he knows how to handle his players. The Armenian hardly got a look in for the first few months of this campaign but, with the proper training program, he’s quickly become one of the most fluid and dangerous forwards in the Premier League.

Martial posted an Instagram photo, seemingly in response to all he speculation: 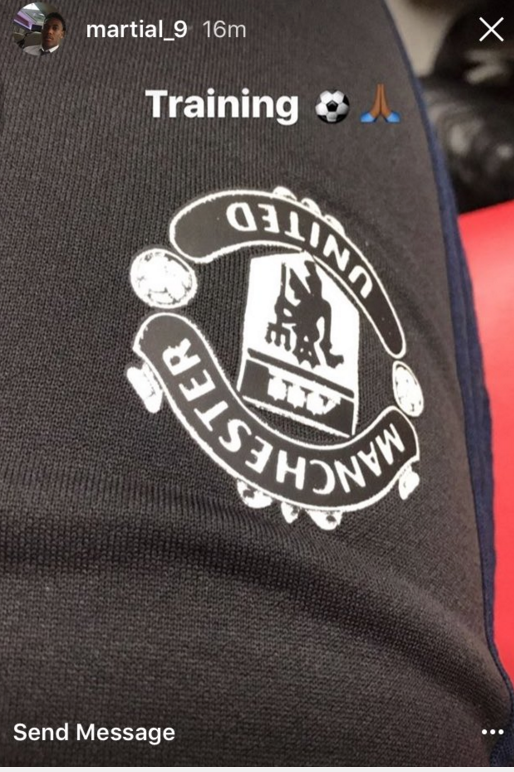 Mourinho has a great football eye and surely realises the value of Martial as a player for now and the future. Manchester United are a better team with him starting and many will hope that by the end of the season he will be a nailed on starter.