Manchester United Jose made it clear again after Wayne Rooney’s interview on Wednesday night, that he will be bringing in another midfielder before the end of the transfer window.

“We are going to sign one more player, that’s for sure,”

“I don’t want to speak about Paul because he is a Juventus player and I don’t like other managers speaking about my players. I don’t speak about their players but the reality is we are going to sign one more player. The market closes on 31 August so we have plenty of time to do that but obviously I would like to do it before the Premier League starts.”

Pogba may well come, but he’s unlikely to be signed before The Community Shield and unlikely to be fit for the start of the season, as he’s been out of action since the EURO 2016 final in July.

And, despite a fairly drab team performance from Manchester United against Everton, there are signs of improved form from some of United’s hitherto more peripheral midfielders.

Morgan Schneiderlin has a fresh start and he already looks as if some of his confidence is returning after a poor debut season at the club.

And Ander Herrera is showing signs of improved consistency – his erratic performances from week to week have been a central symptom of his United career.

So Jose will play at least the next two games with the squad that he has right now.

And what is the best XI?

I think that we can fill in some of the blanks for sure.

Working backwards, Zlatan and Wazza will definitely start. TFF would most certainly be inclined to play Marcus Rashford on the right until Henrikh Mkhitaryan has found his feet. Quite simply, Rashford is ready and Henrikh not quite at this stage.

On the left Anthony Martial will be back to his bewitching best before long.

Michael Carrick is the safe shout for the anchor man role and perhaps we can expect Ander Herrera to start the next two games in the more attacking role.

The back five would normally include Chris Smalling but injury has deprived him of a pre-season so it looks to us as if it’s a straight fight between Jones and Blind for the right to partner the tenacious Eric Bailly. We think that Blind may be a bit more battle-ready for now but Jones showed some really crisp passing against Everton.

Luke Shaw is nailed down on the left side and Antonio Valencia has done enough to warrant a start at right back.

Need we even discuss the man between the sticks?

So here is how we see Manchester United’s best current XI on form and the XI which may well start The Community Shield. 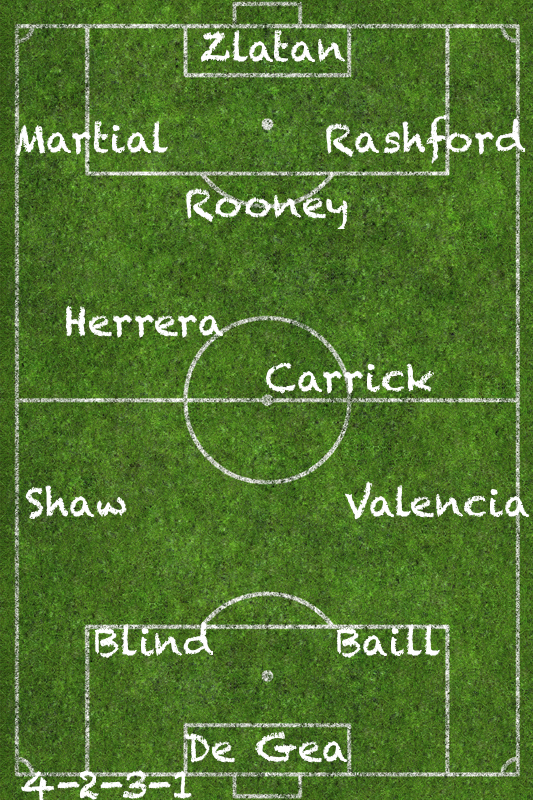