They just keep winning. And in yet another indication of how gloriously unpredictable this Premier League is, Chelsea have come from nowhere to boss the title race over the last month.

When they lost 3-0 to Arsenal no one saw this coming.

It makes TFF wonder why three at the back has so seldom worked in the Premier League before now. Perhaps no manager has had enough conviction to see the system through the teething problems.

Regardless, Chelsea will surely stick to the 3-4-3 and see where it takes them.

An away trip to Sunderland shouldn’t cause too may problems. The Black Cats are somewhat uninspiring but David Moyes always has them working hard. But this probably won’t be enough to stop Chelsea’s counter attacks which seem to improve on every away trip.

Oscar and John Terry are the only injured players right now but neither are currently in the first team picture anyway.

Oscar may be fit for the squad against Sunderland but Terry is most likely ruled out until next weekend at least.

These peripheral injuries shouldn’t bother Antonio Conte, who probably has his eye on another couple of reinforcements in the January transfer window.

We fully expect another win for one of the most settled XIs in the league right now.

Chelsea fans: can you fathom any other starting line up than this one? 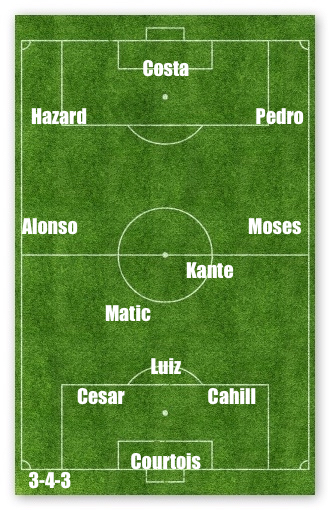