So Manchester United can no longer qualify for the Champions League through the Premier League this season. Now seven points off the top four their recent slump has left them with only the Europa League as a possible entry route to the top table of club football next season.

But this is not necessarily a dead rubber. Because while Jose Mourinho will clearly rest players for this game, lots of the Manchester United stars on show will be playing for their chance to represent the club in that huge Europa League final next Wednesday.

Players like Jesse Lingard and Anthony Martial are by no means guaranteed a start on May 24 against Ajax and they will need to put in big performances if they get the chance against Southampton.

Wayne Rooney scored Manchester United’s consolation goal against Tottenham at the weekend and we expect him to start the game against the Saints. That will probably mean that he misses out against Ajax with Anthony Martial or Marcus Rashford more likely to play up top on that one. Manchester United’s injury list is fairly substantial – Young, Shaw, Fosu-Mensah, Zlatan, Rojo – but only the last two players on that list have serious injuries.

We do expect starts for the likes of Tuanzabe, Darmian and Fellaini.

So here is how we see Manchester United lining up for this one and it really is just a pure guess because any XI is possible as Jose focuses on Ajax. And, for once, we do expect Manchester United to lose this game against a Southampton side which is still trying to play for Premier League position. 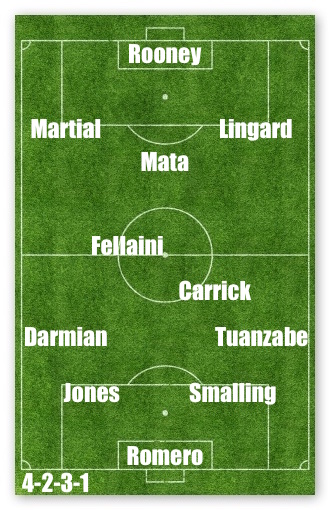