Manchester United are without some familiar faces for their most important game of the season.

But, on the back of a commanding defeat of league leaders Chelsea at the weekend, they go into the game full of confidence and in good form.

One of the most eye-catching performers over the last few weeks has of course been Marcus Rashford. Even though he hasn’t scored anything like as regularly as last season his movement and pace are truly frightening for the opponent.

Imagine how defenders must feel when even Rashford doesn’t appear to know what his bewitchingly quick feet are going to do at times.

But he’s a wonderful weapon for any manager to possess and he’s the sort of crowd pleaser that Manchester United fans want to see every week.

TFF believes that he will start at Old Trafford as Jose Mourinho attempts to blast Anderlecht away in the first twenty minutes wit pace and power.

And many would love to see Anthony Martial on the other flank, doing similarly pacy and penetrative damage to the Belgian defence.

TFF believes that these two need to play in tandem more often because it makes Manchester United far stronger with those two points of attack.

We believe that Martial, Mkhitaryan and Rashford behind Zlatan would be the best Manchester United XI and we hope that Jose will go with this selection this evening.

So here is TFF’s predicted/hoped for XI. United fans: is this the strongest team that Jose could put out? 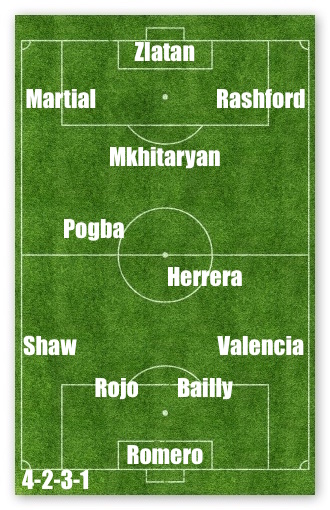