After getting eliminated from the Carabao Cup last week, Manchester United suffered a heavy defeat in the Premier League vs West Ham United and now, the Red Devils find themselves in 10th place.

Next up, Mourinho’s men will collide against Valencia in the UEFA Champions League and will hope to get back to winning ways. United won their opening game of the competition by beating Young Boys away from home.

As far as the team news is concerned, the former Chelsea boss should make more than a few changes in the team that started vs the Hammers at the weekend.

Antonio Valencia did not even travel for the last fixture but he should return to start in the right back position vs the Spanish side. He will likely start with Shaw, Lindelof and Smalling in the back line in front of Spanish goalie David De Gea.

Fred scored a goal against Derby County but did not start against West Ham. We can expect the Brazilian international to return to the starting XI and partner Pogba and Matic in the midfield.

In the attacking third, Rashford and Sanchez should return to start with Lukaku. Here is Man Utd’s strongest possible 4-3-3 XI vs Valencia. 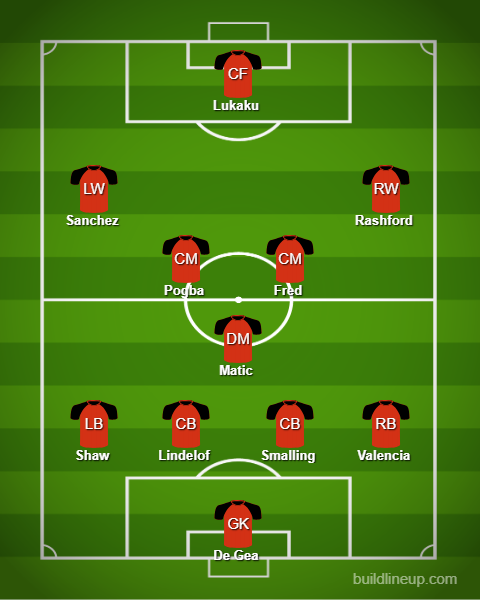