Hardly a window goes by without Manchester United legend Ronaldo being linked with a return to the club. Whilst the latest rumours stop short of that, reports in Portugal suggest that the player wants to leave Real Madrid this summer and that his decision is irreversible. That is according to A Bola who say that the player has made a firm decision.

Cristiano Ronaldo, 32, has told Real Madrid he wants to leave Spain and his decision is “irreversible”. (A Bola) 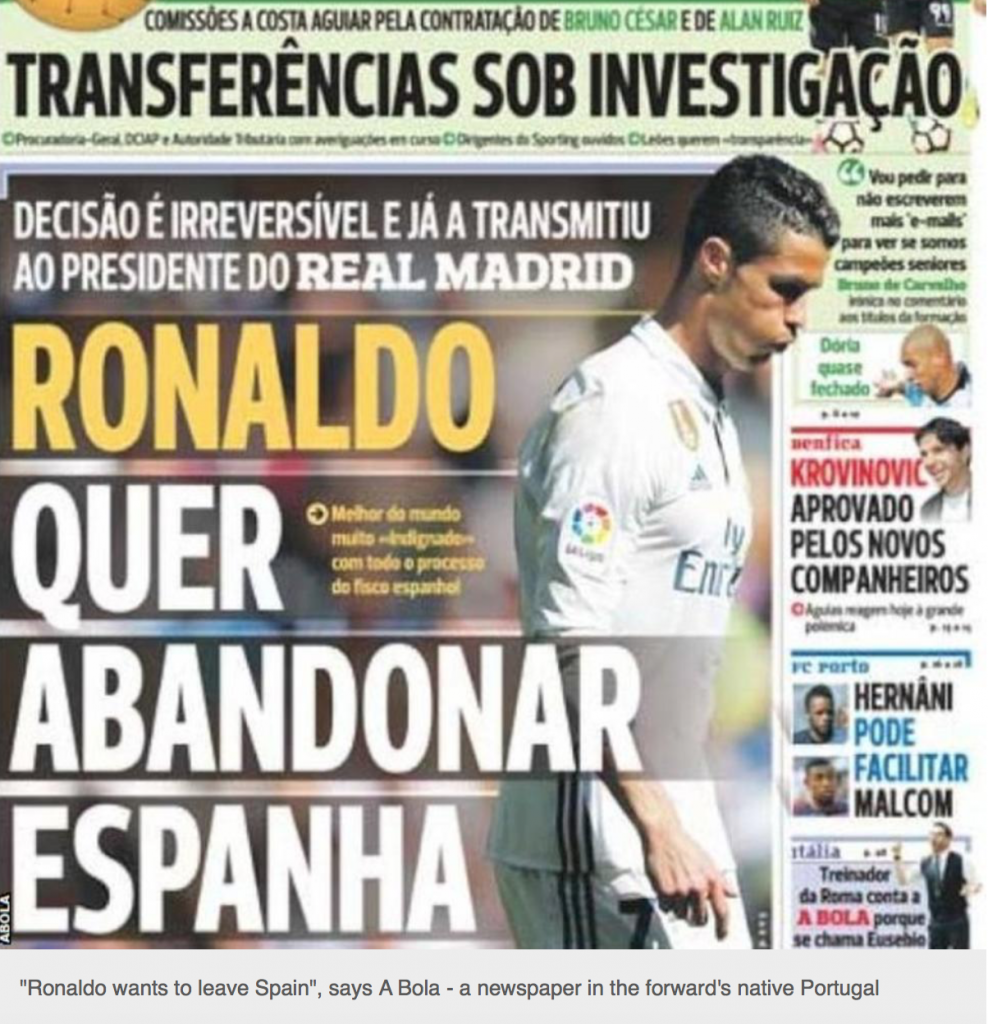 Jose Mourinho and Ronaldo didn’t always get on that well at Real Madrid but surely the Portuguese man would want to bring the legendary number nine back to the club given the chance.

In other news Manchester United are apparently valuing their keeper David de Sea at £100 million but will do a deal with Real Madrid for Alvaro Morata plus 45m GBP. That’s according to British media outlet The Daily Star.

The Manchester United boss has told La Liga giants they can sign the Spanish goalkeeper for £45m PLUS striker Alvaro Morata.

And the Independent reports that Manchester United are still haggling over a fee for the striker. They are apparently prepared to spend £60 million on the Spaniard but Real Madrid are holding out for closer to 78m GBP in what is being described as a hugely attractive package already.

And the Manchester Evening News goes with the story that winger Ivan Perisic is already setting his sights on a move to Manchester United and getting ready for life in the northwest of England.

Ivan Perisic is already planning for life as a Manchester United player and expects to join the club this summer, according to sources close to the player.

MEN Sport understands an agreement has not yet been reached between United and Inter Milan over a fee, but Perisic’s camp do not believe that will prove an issue.

It is understood that the Croatian ‘appreciates’ and ‘enjoys’ the work of Jose Mourinho and is keen on playing in the Champions League again after a four-year absence.

The 28-year-old has been strongly linked with a move to Manchester United all summer and could bring some ruthless cutting edge to that frontline as he is so efficient going forward and rarely wastes possession.

As a player who generally plays on the left side of the forward line this does bring into question the future of Anthony Martial at Manchester United. After a brilliant first season at the club he wasn’t as central to Jose Mourinho’s plans last term but Manchester United fans would love to see him remain at the club beyond this Summer.