Chelsea have earned 20 out of the possible 24 points under new boss Maurizio Sarri and next up, the Blues will collide against Manchester United, who have struggled recently under the management of Jose Mourinho.

The Stamford Bridge club defeated the Saints in their last PL contest before the international break and they will be looking to punish an out of form United side.

The Red Devils bounced back from two goals down to earn all three points vs Newcastle United in their last league game. Can Mourinho upset his former club in their own backyard?

As far as Chelsea’s team news is concerned, the major injury concern is that of German international Antonio Rudiger, who withdrew from Low’s squad due to a groin problem and he has not recovered as yet.

The 25-year-old defender has started every PL game for Chelsea this season but he might miss the contest vs United and we can expect Cahill to return to the starting XI. The former Bolton player should partner Luiz in the central defense. Azpilicueta and Alsono should start in the full-back positions.

In the center of the park, Jorginho, Kante should retain their starting places but Kovacic could return to replace Barkley.

As far as the attack is concerned, Willian and Hazard should start up front with French center forward Olivier Giroud. Here is Chelsea’s strongest possible 4-3-3 XI vs Man Utd. 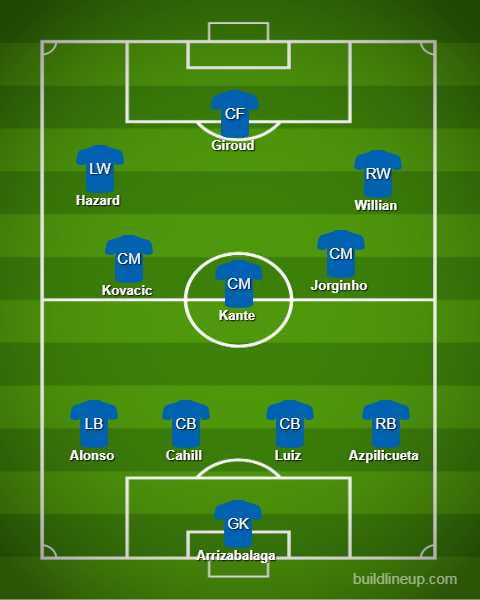