Liverpool suffered their first defeat of the season at the hands of Chelsea at Anfield in the Carabao Cup. Now, the Reds will face the Blues in the Premier League at Stamford Bridge on Saturday. Who will come out on top?

The Merseysiders are the only team left with the perfect record in the league after Chelsea failed to beat West Ham last weekend. A draw for Klopp’s men might not be enough to maintain top spot if Man City win their fixture against Brighton.

The German manager started his B side in the League Cup and it will not be surprising to see star players return for the PL fixture against Sarri’s men.

Brazilian goalie Alisson Becker will probably return to replace Simon Mignolet in the starting XI. Alexander-Arnold and Robertson should replace Clyne and Moreno in the full back positions. Moreover, Matip and Gomez could return to replace Lovren and Matip in the central defense.

As far as the midfield is concerned, Wijnaldum, Henderson might return to partner Milner in the center of the park.

In the attacking third, Salah and Firmino should replace Shaqiri and Sturridge to start with Sadio Mane. Here is Liverpool’s probable starting XI vs Chelsea. 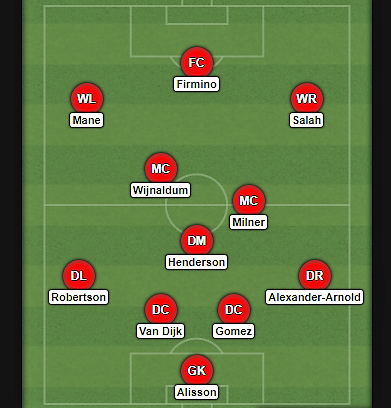