Unfortunately for many this round of fixtures signals the end of club football for another two arduous weeks, as virtually pointless internationals take their place for a barely fathomable fortnight. Can’t we just draw lots for The World Cup?

But at least we have a genuine super Sunday to savour with some big ties to enjoy.

Not least Manchester United vs Stoke where we can try to gauge how far this exorbitantly priced United team has progressed under Jose. Another workmanlike and clunky victory over Ukranian minnows in the week didn’t inspire too much confidence but playing badly and winning is, at least, the hallmark of great teams.

But Manchester United were all too ponderous on Thursday night. As has been the problem for several years, they simply aren’t moving the ball quickly or with enough daring.

We blame this largely on the Belgian lump Marouane Fellaini. That Jose Mourinho sees fit to select him ahead of Michael Carrick and Ander Herrera remains a genuine concern. An idiot can see that Fellaini is just not cut out for top level, modern football. He even makes Jesse Lingard look like a good player.

Let’s just hope that Jose is still searching for his best XI. And the return to fitness of Henrikh – he was pronounced ready for action this week – should speed up the process. Because, although Juan Mata was imperious at number 10 against the champions last weekend, the Armenian has more power, dribbling ability and pace in the hole behind the number 9. On form he can be one of the best players in the league and we would like to see him from the start against Stoke.

More likely Mata will start with Henrikh getting 20-25 minutes off the bench with United a couple of goals to the good.

TFF has been rallying for Rashford to start wide and he’s played the last few games on the wing, which is such an achingly obvious solution for one with such pace and dribbling ability.

And when Martial finds his feet on the other flank the team will start to look very threatening.

So here’s our predicted Manchester United XI for what should be a home win. 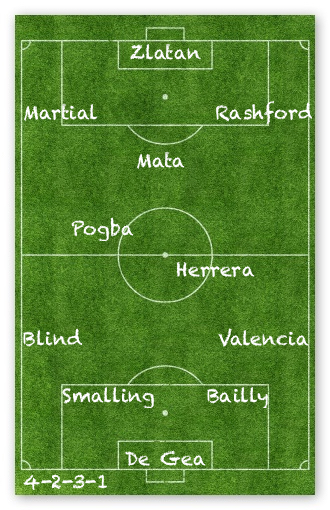