The problem with Tottenham is that they take too long each season to kick into gear. They drew too many games again at the start of this campaign and had they turned those into wins then they might have quite comfortably won the Premier League title despite the excellent form of Chelsea.

They have got to hit the ground running in the next campaign because if they can do so they will be genuine title challengers after Mauricio Pochettino has done such great work at this club.

Because Tottenham were the best side for the last 10 weeks of the season and they were swatting opponents aside with ridiculous ease. That partnership of Dele Alli and Harry Kane up top is quite sensational as they read each other’s minds. They’re going to be an amazing pair for England as well as Tottenham over the next few years if the club can hold onto them both.

The goalkeeping position was excellently marshalled once more by Hugo Lloris. And the fullbacks Kyle Walker and Danny Rose were two of the best players in the Premier League this season.

The same has to be said for Alderweireld and Vertonghen who make up a brilliant back five for Spurs.

Victor Wanyama, Eric Dier and Moussa Dembélé were the best three players in the midfield for Tottenham this season and further forward Eriksen, Alli and Kane were an amazing triumvirate.

So here is our strongest Tottenham XI for the season – do you agree? 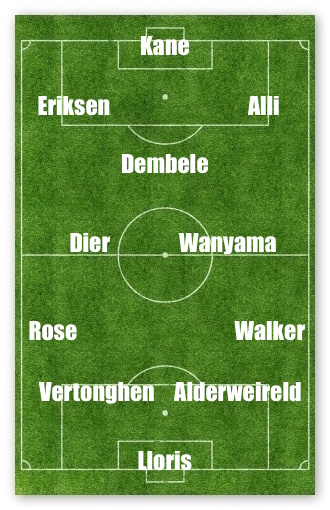