Tottenham may have started the season slowly but they were still picking up points.

And now their form is improved things are looking extremely promising for them.

That brilliant victory against Chelsea brought the Blues’ thirteen match unbeaten run to an end and put them in excellent position in the table and in contention for their first title in decades with half of the season to go.

But they obviously need to keep it going against West Bromwich Albion at the weekend and three points is an absolute requirement if they really do want to break through that glass ceiling and finally win a title.

An interesting element of the game against Chelsea, and one which once again showed the tactical genius of Mauricio Pochettino, was the three at the back formation.

Will the Tottenham boss go with it again? We think that it might be a case of horses for courses and it won’t be a formation that he uses every week.

Tottenham, are more accustomed to playing the 4-3-3 and have also been compelling in that formation over the last few weeks.

It gives them slightly more attacking power against the lesser sides and we think that they will go back to four at the back with their pacy fullbacks on Saturday.

Only Erik Lamela is injured right now and Spurs have a very fit looking squad so here is TFF’s 11 for a game which we fully expect the home side to win. Tottenham fans: would you make any changes to the side? 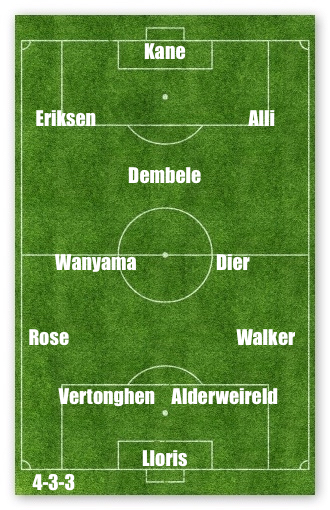