He told the amassed media at Carrington that Paul Pogba is ready for action, if not completely battle-hardened:

‘the condition is okay to play some minutes.’

He also told the press that Chris Smalling is fit and ready after injury and suspension kept him out of Manchester United’s first two competitive games of the season.

And Smalling’s is an interesting case. Perhaps we shouldn’t read too much into it if Mourinho leaves him on the bench tomorrow. He is, after all, surely short of match sharpness.

But he was such a big player for Manchester United last season that he would be not a little peeved if he finds himself down the pecking order after a great start to the season for Eric Bailly and Daley Blind.

But Jose did suggest that players can only gain sharpness by playing games:

“We played against Leicester with players with less training than him and we saw that match as a way to improve them. With Paul it’s a bit the same”

So that rule should also apply to Smalling right? It will be fascinating to see if he starts against a very competent Southampton side. But we think that Blind will get the nod – at least for the start of the match.

We await news on Jesse Lingard who suffered a knock after The Community Shield.

But Juan Mata may feel he deserves another start after breaking the deadlock against Bournemouth and Henrikh Mkhitaryan will be chomping at the bit for minutes.

With all this in mind, here is how we feel Manchester United will line up for the uber-exciting debut of Paul Pogba on Friday night. TFF will definitely be tuned in for that one. 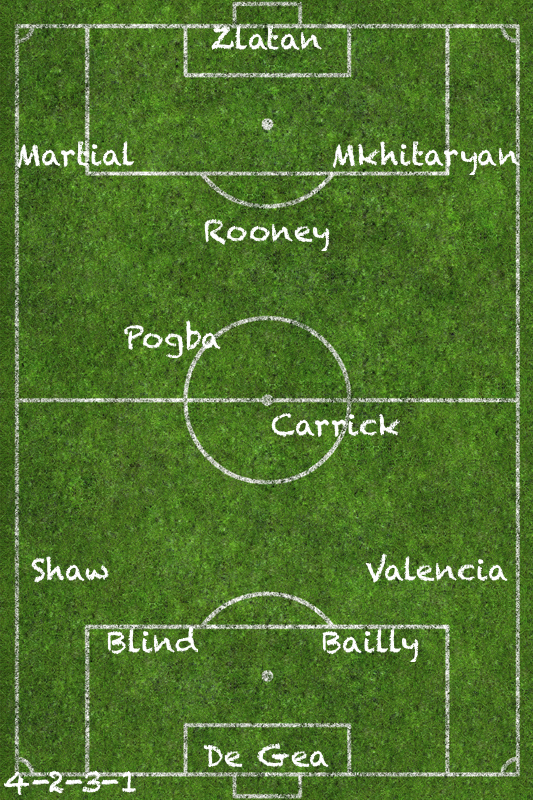