The rumours are already flying around this summer about who Manchester United will splurge their seemingly bottomless pit of cash on in the transfer window.

And two names which have popped up this week will really leave Manchester United fans salivating. James Rodriguez has been increasingly prominent this season for Real Madrid but hasn’t always been a number one choice in the starting lineup. His agent Jorge Mendes also looks after Jose Mourinho so that could massage the possibility of a move this summer. And Gareth Bale has also been mentioned again as a potential arrival by Talksport pundit Graham Hunter this week. He spoke about both of these guys and seems optimistic that two deals are possible.

“I think Gareth Bale is mulling things over at the moment,” he said.

and with regards Rodriguez:

“Real Madrid want to sell, his price is gettable by Manchester United and they want a world star,” said Hunter.

“It fits for Manchester United and I think it is going to happen.

“It makes total sense to me. He is definitely going [to leave Real Madrid].”

Bale has been a genuine success at Real Madrid even though he hasn’t always been cheered by the fans. But the same could be said of Cristiano Ronaldo so you can read into that what you like. Manchester United would desperately love to have Bale in their ranks because he would add such speed and penetration to the attack. He will surely come back to England at some stage in his career to move closer to home and Wales.

As for Rodriguez he can play anywhere across the front line or in the hole behind the main striker. At 25 he has his best years ahead of him and we think that with Bale and Rodriguez in the starting line up Manchester United would have to be title favourites.

So here is the potential line up. Manchester United fans – a title winning side? 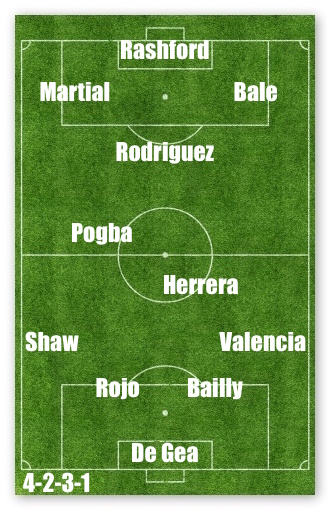